Your Characters: What’s in a Face? 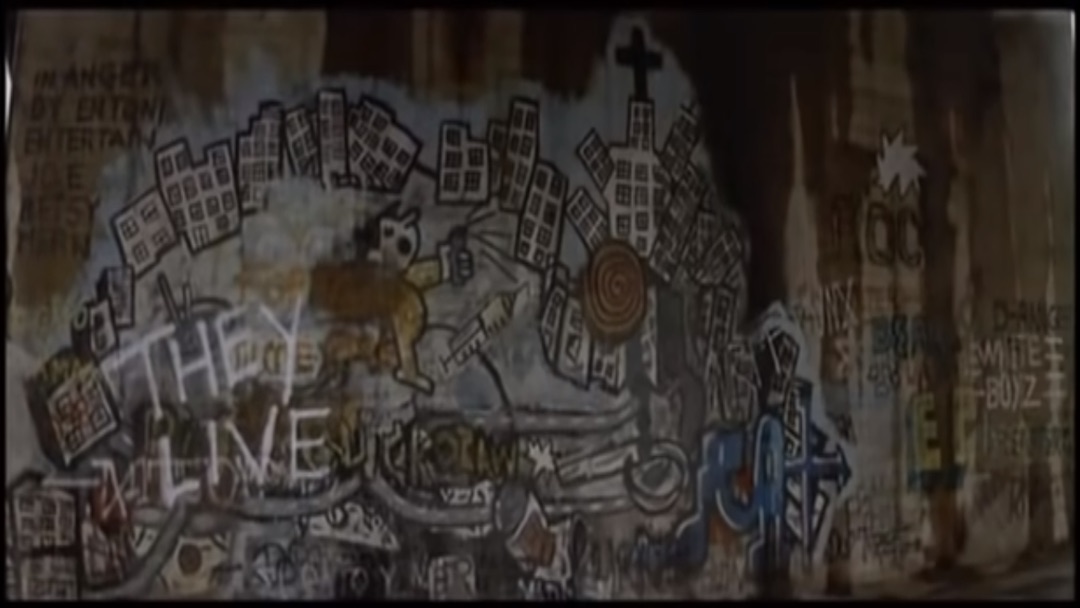 Times of unrest and self-examination call for films that help us deal with these big issues. They Live is a powerful cultural statement disguised as a sci-fi dramedy, which allows the viewer to choose how deeply they engage with the heady themes of identity and social status.

A drifter/construction worker named John Nada arrives in Los Angeles. His inquisitive nature leads him to discover a group of people who are fighting against an alien signal. They developed special sunglasses that disrupt this signal, but every day they are dodging the threat of assault by the alien authorities. Nada doesn’t believe it until he wears the shades and sees that the aliens are skinless creatures with distorted faces. They hide in plain sight as well-off humans and control the media and capitalist greed culture through subliminal messaging. Together with a fellow construction worker named Frank, Nada manages to destroy the tower that broadcasts the alien signal, exposing their true appearance and presence to the local humanity. 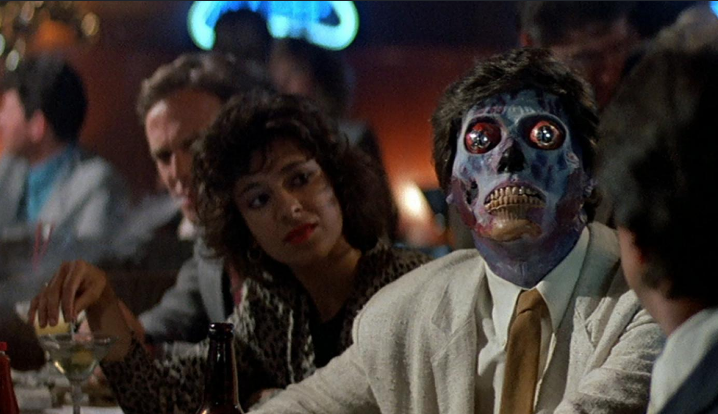 Lauded for its political and social commentary, but panned for its 1950s B-movie style and having a wrestler in the lead role, They Live is one of those cult classics with some really intriguing layers. You can spend hours online reading analyses on it (and I encourage you to!) but for now, I want to explore the use of the face as a symbol.

Although the main antagonists in the film are aliens, the use of tentacles, antennae, tails, horns, or scales could never convey the deep subtext of the film the way a face can.

The human face is probably the most powerful feature of the body, itself comprised of a number of features that allow us to perceive and communicate with the world. It conveys emotion, intent, and desire, on its own or with the support of the sounds we know as speech. The face also communicates information on one’s age, sex, race, health, and energy levels. All this, together with the fact that we can’t see our own faces without a reflective surface or someone’s observation, points to another of its key purposes: establishing identity.

Manipulating the face changes its psychological representation and meaning. Applying makeup before going out to work, putting on a mask as part of a show, or injuring someone’s face in an attack, all affect how someone is perceived and valued by the world at large.

The aliens in They Live are a cunning class who know their power is in remaining hidden. They pass for a perfectly normal human being, but their natural faces are devoid of skin, lips, nostrils and eyelids. This shows how they’re the ultimate consumer – they are raw nerves that feel everything, see everything, eat, drink, and inhale everything without a filter. It also shows their vacuousness; without a face, they lack the capacity to express nuance or depth of emotion. To be faceless is to be without selfhood or identity.

It has always been interesting to me that the only way to see the aliens is by obscuring the eyes with sunglasses. The special shades reveal the hidden messages in advertising, signs, and printed money. Using the hidden to view the hidden is the film’s implicit call to look within – how are “we” (the capitalist society) ignoring freedom and self because the greed culture is too hard to let go of? This reticence is what the aliens rely upon, and reward “us” for, with lavish lifestyles and all the trappings of what society calls success.

These successful people are also mainly white. I’m going to go for an interesting jump about the use of the black shades. They Live highlights the racial divides in society, showing black and multicultural faces as part of the have-nots in the world. The whites who accompany them in their struggles only do so because of poverty, which seems to be self-made – they could get out of poverty in a snap if they only opted for the materialistic lifestyle offered by the aliens. (We see this in the nameless white drifter who lives in the Justiceville shantytown at the start of the film, and later appears in a tux with champagne as a member of the aliens’ gala event.)

After a long time of injustice and suffering, giving up the fight for equality starts to look enticing. Why not aim to simply “survive” as a minority and be left alone, walking a tightrope of good behaviour. In the in/famous fight scene between Nada and Frank, a black man, Nada is trying to make him wear special sunglasses. Frank says, “Look, I got a job now. And I plan on keeping it. I’m walking a white line all the time. I don’t bother nobody, nobody bothers me.”

Considering that minority groups are typically the ones to call attention to the machine of inequality, it’s almost like Nada force-reminds Frank to look at the world through black-ness – the shades – to see the hidden enemy at work. It’s a caution against complacency that somewhat reminds me of Get Out. On the flipside, the shades could also be an invitation to see what is only another layer of the white world through white eyes, doubling Frank’s oppression by Nada joining him in it.

John Carpenter said he just wanted a “good fight” for this scene, but in an astute film like this that tries to pass itself off as a B-movie, you can’t take anything at face value.

When writing your script, consider how much of your characters’ intent and backstory can be conveyed on the amazing canvas of their faces. Learn how to do this and express it in your own unique ways with Raindance’s upcoming Filmmakers’ Foundation Certificate and Screenwriters Foundation Certificate.

They Live is available on most streaming platforms.

Celeste Ramos is a Raindance member and writer of fiction, short film and poetry from New York City. Based in London, she studies symbology and art between watching movies.