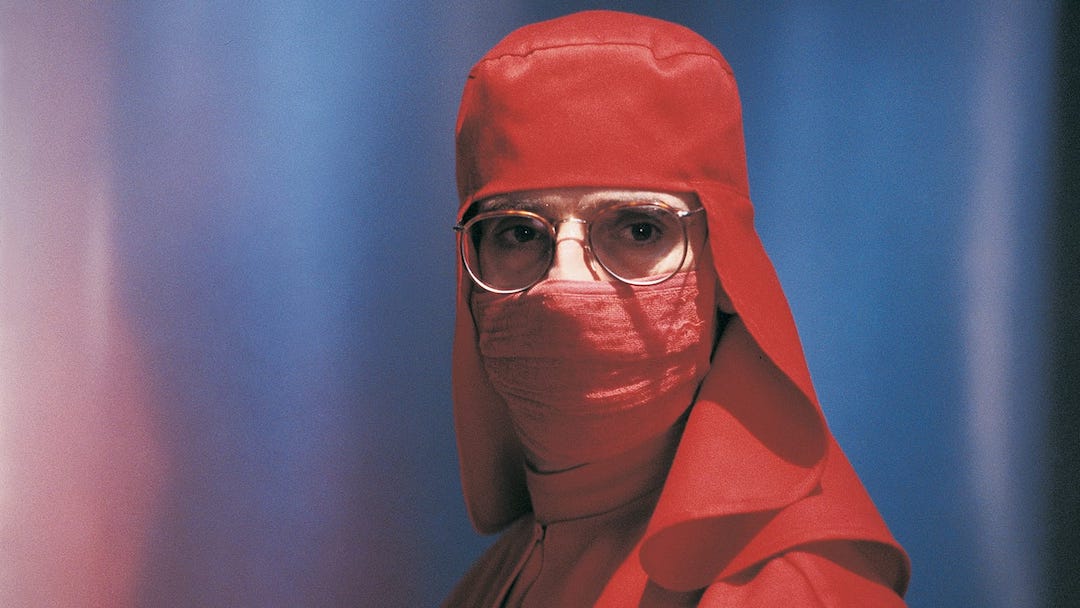 The ultimate symbols for duality, twins are typically found in opposite film genres – thriller and comedy. Wouldn’t it be funny – or wouldn’t it be scary – if there was more than one of “you”?

While twins and further multiples are certainly individuals, part of their allure is that they’re the “same”* in the minds of non-twins, making their behaviour an intriguing thing to observe. In film, twins are the most fertile creative ground for thrillers, because they go deep into the ego’s fantasies and fears of being multiplied – limitless possibility meets annihilation of self. But the psychic and emotional connection said to be shared be twins may have something to say about how we are all, somehow, connected.

The psychothriller classic stars Jeremy Irons as both the extroverted Elliot Mantle, and the more introverted and emotional Beverly Mantle. The identical twins work as leading gynaecologists specialising in fertility. The heart of their connection lies in synchronicity; no experience exists for them until they’ve each had it, or one has told the other about it. As such, they share everything from their living space to their workspace, and their women.

One woman, Claire Niveau, is a well-known actress who comes to their clinic because she’s desperate to conceive. The Mantles discover a rare mutation in her uterus that will make conception impossible. Taken by her beauty and mysterious nature, Elliot courts her and eventually beds her. The shier Beverly “tries her” the next time around, while Claire remains ignorant that she’s sleeping with twins. Elliot thinks she’s just using them to maintain a prescription drug habit. Beverly and Claire start forming a genuine emotional attachment, and he starts taking pills with Claire. A female friend alerts Claire that the Mantles are identical twins. Furious, Claire confronts them and breaks everything off.

Beverly falls apart emotionally and continues taking pills. He and Claire reunite, just as Elliot plans to expand their work in another city. This would leave the addict Beverly with more responsibility at the clinic. As their love deepens, Beverly begins having nightmares about Claire separating him from Elliot. Claire gets called away to shoot a movie, leaving Beverly physically and emotionally alone. Elliot, who so staunchly defends their connection throughout the film, returns to take care of Beverly. In trying to resynchronise himself with his brother, Elliot mirrors Beverly’s drug habit, until he too becomes addicted.

Beverly almost kills a woman because he’s high during her surgery. Elliot comes to his brother’s defence by posing as him during the subsequent board review. The act fails, and the doctors lose their clout and their practice. Ahead of what they deem to be an inevitable severing, they talk about Cheng and Eng, Siamese twins who were separated by death. Beverly kills Elliot, makes a silent phone call to Claire, and then commits suicide, landing slumped across his brother’s body.

Nawal Marwan is dead. Her will makes two intense demands of her adult fraternal twins, Jeanne and Simon: she can’t have a proper burial until they deliver a letter to the father they never met, and another letter to the brother they didn’t know they had. The twins argue, and Simon refuses to participate in another of their “crazy” mother’s requests. He is determined to stay behind in Toronto. Jeanne, a brilliant math student, sees an inevitable, consequential power in their situation and chooses to go first in search of their father. She’s certain her twin will follow.

Nawal’s past intertwines with Jeanne’s journey in the present. Nawal fell in love and became pregnant by a man her family disapproved of. They killed him, and Nawal was spared death by honour killing if she gave up the baby and went to the city to gain an education. She gave birth to a boy who was immediately placed in an orphanage. When Nawal was in university and war broke out in the remote region she was from, she was devastated to find that the orphanage was destroyed.

Jeanne returns to the unnamed Middle Eastern country where their mother grew up. Her mother’s name evokes fond and unsavoury reactions from the people she meets as she retraces her mother’s life. Along with Jeanne, we learn that Nawal committed a murder several years later. She was sent to the infamous Kfar Ryat prison, where she was raped by a torturer named Abou Tareq, resulting in the twins.

Jeanne mourns their mother’s history and the rape she endured, and demands that Simon join her to find their lost brother. Their mother’s notary uses his regional connections and helps Simon discover that their brother is a man known as Nihad de May.

The search for Nihad leads to a dangerous militant, who tells Simon that Nihad was in fact saved from the destruction of the orphanage. He was a child soldier and later a prolific marksman. The traumas of war and recruitment by an opposing faction turned Nihad de May into a torturer at Kfar Ryat prison. There, he became Abou Tareq, who now lives in Toronto.

Twins in film represent the idea of having more than one approach to life, to be able to do something over, or to be in more than one place at the same time. Freud’s essay on “The Uncanny” (1919), Otto Rank’s theory of “The Double” (1971), Hillel Schwarz’s Culture of the Copy (1996), and some twin psychology studies posit that having a twin represents an egoic protection against death. In essence, there is glory and distress in the thought that “there is more than one of me.” People who are identical or bear a strong resemblance to each other introduce the urge in non-twins to treat them as the same, because their appearance can influence assumptions about their actions, personalities, desires, and even thoughts. From a Jungian perspective, a twin can be a vehicle for the shadow self – the repressed self, the taboo/opposite one – who does what “we” or the primary twin won’t do (see also doppelgangers).

Dead Ringers and Incendies take two different and powerful approaches to the idea of twin connection. The Mantle twins are connected by their self-involvement as two people living what is essentially the same life. It’s interesting but not surprising that they specialize in fertility. They make women’s bodies central to their work, yet their detached approach seems to affirm a belief in self-replication over conception – that people can duplicate themselves just as they seem to have been born out of nowhere – we never see their parents or hear mention of their mother. The arrival of the mother/lover figure in the form of Claire triggers the individuation process they never had, resulting in an ego death spiral that the drugs and emotion won’t allow the twins to pull out of. It’s impossible to conceive a world where they aren’t connected to each other.

Where the Mantles share a toxic, personal twinship, the Marwan twins connect through a sense of interpersonal responsibility on the way to wholeness. They are connected through their histories and the doomed roles of their mother and father. They take on an interpretation of the consequences of war, and the way personal histories must be carried or obliterated as a result. It is so often that brothers and fathers are the ones lost to war, with the mothers and sisters left behind to mourn.

Whether fraternal or identical, twin characters in film can be used to examine self-development, and how much we may put our histories and our fantasies ahead of living in the present. In the end, what many of us want is to have that one person who knows us better than anyone; the one who shares a thought, a breath, a moment, a history, a future.

Watch Dead Ringers and Incendies on your preferred streaming service.

Celeste Ramos is a Raindance member and writer of fiction, short film and poetry from New York City. Based in London, she studies symbology and art between watching movies.