Writing a One Location Short Film 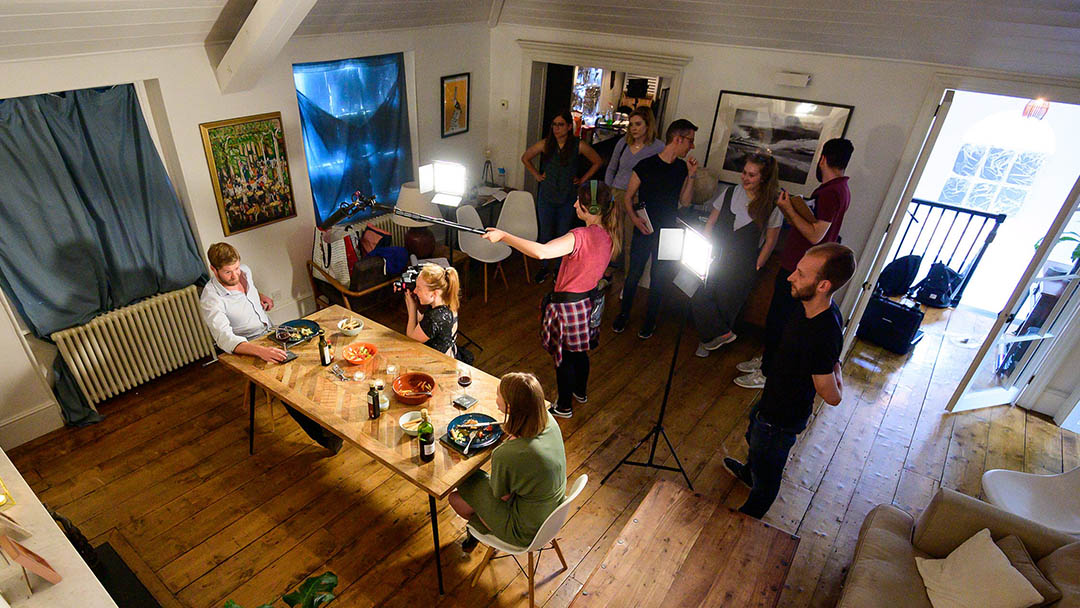 One of the biggest challenges we face as filmmakers when making short films is budget restraints. It may be tempting when writing your first screenplay to go as big as you can: adding a full roster of characters, a location filled road trip or even explosions. These are things that will quickly eat through your limited budget and be a difficult hurdle to overcome.

This is why a good first step for up and coming filmmakers is to make a one location film. This is something that has launched the careers of many writers and directors, from Sam Rami (The Evil Dead) to Quentin Tarantino (Reservoir Dogs is essentially set in one room, don’t @ me).

I set the challenge for myself to make some one location shorts, with The Many Faces of Beth Jones and my most recent short Yes, Virginia and will share with you what I’ve learnt. Admittedly both films have a thirty second scene set elsewhere, but let’s ignore that for now.

Whilst it’s often said that if a location is a prominent enough feature in a film it can become like a character itself, it’s the actual physical characters that will make your story shine. By focusing on the character’s narrative progression you can save on needing multiple locations as the audience will feel like they’ve followed their arc beyond the confines of the set.

Yes, Virginia has two central characters, Virginia, a woman who can grant people’s wishes and Nick, her doting boyfriend. It was important for me to have this film told from Virginia’s point of view in order to get the audience to sympathise with her from the start. I wanted to set it up early on that she has deep inner turmoil, which I chose to show through the words she uses and mannerisms. To juxtapose this, Nick is an emotionally closed character, speaking very little and acting dismissive. His motives are then revealed in the final moments of the film as his true manipulation of their relationship becomes clear.

Even when confined to one location you can experiment with cinematography to hold the audience’s interests. The television show Kidding has a scene that shows the passing of time in a one bedroom apartment by constantly rotating the camera and showing the character’s day to day life.

The Many Faces of Beth Jones also has two main characters, but the twist here being that they are both played by the same actress. In order to hide Lucy Hilton-Jones’ Agent character’s identity we found different things to focus the camera on, from her hands to extreme close ups of the mouth. By keeping the running time short and having most of the film showing mid-shots of the other character Beth we (hopefully) stopped the audience from guessing.

With Yes, Virginia I wanted the cinematography to reflect Virginia’s mood. During the first half of the film we went with conventional rule of third framing, but during her upsetting story of her friend’s suicide the camera pushes in, moving the empty space behind her instead. This is to represent her feeling isolated and alone.

Use Locations You Have

To keep location costs low (or even zero) come up with a list of places you have access to already. Whenever you’re coming up with new stories you can come back to this list and find a suitable place to set it. Don’t let this lead to only ever writing about your own flat though, do you know anyone who works in a bar? An interesting office? A warehouse? Then see if they can sneak you in after hours for filming.

The short second scene in The Many Faces of Beth Jones (I know, I said I was going to ignore it) is set in a cinema, luckily I know people that work in one and they allowed us to come in early before the screenings started for the day to film, as long as we didn’t get any of their branding in shot.

Alternatively, if there’s a location you really want to use, you can try to strike up a deal with the owners to get a discount or free days shoot. Perhaps that club you envision your film set at needs a new promotional video done.

If you’re interested in having a go at your own one location short, why not check out Raindance’s latest Sixty Second competition.