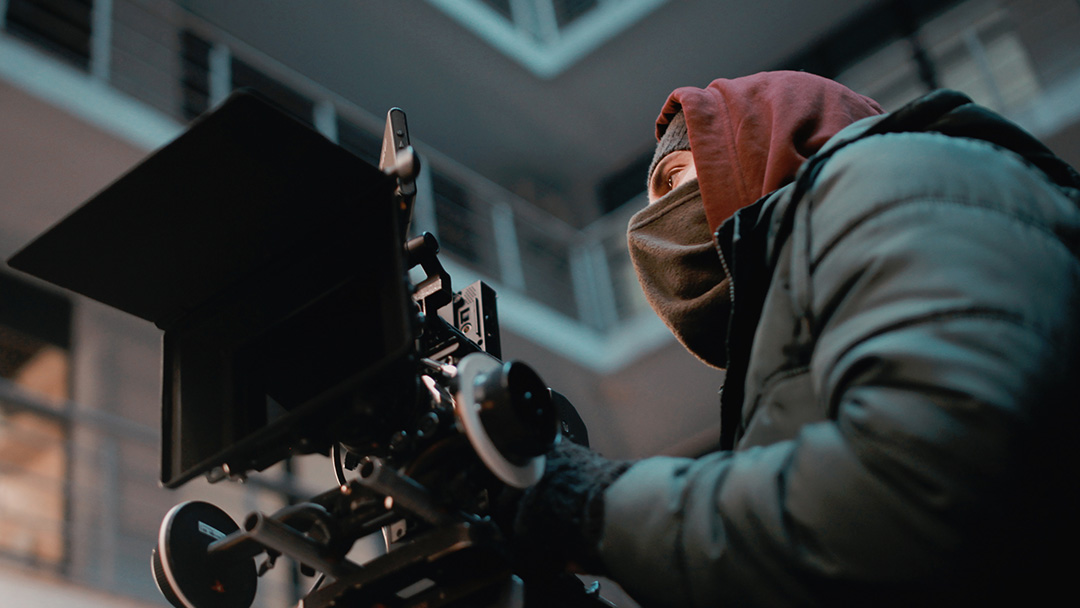 Let’s make a movie! Ok, so who do I know who can produce? Who’s good with a camera? Who can carry off that lead role I’ve written which let’s face it is loosely based on me or some part of me that I like/dislike?

If you’re an indie filmmaker you’ll be used to writing, directing, starring, co-writing, and producing your own movie until you can get the prized assistance of friends and pro’s alike. This experience is what makes a filmmaker really hot on set, so when something goes wrong (everything goes wrong at some stage, that’s normal, it’s not just you) you’re not standing there saying ‘does anyone know how to fix this’, you already know because it’s gone wrong before and you just get stuck in, trust me your cast and crew will respect you for it.

But! And it’s no small but, we’re in lockdown and the only way we’re making a damn movie is via zoom. Well look, this is where we are, these are the times we’re living in, so let’s just crack on and do what we can. This is where a bit of wisdom comes in and if you don’t particularly feel like a wise sage, that’s ok, there is plenty of wisdom between your ears and those around you will fill in the blanks. In times of adversity, you just gotta do like they do in a high school musical and put the show on right here in the school hall! This particular school hall is your kitchen, bathroom, lounge, or bedroom, any of the above will do. There are some great ideas coming out of lockdown film right now, just google lockdown movie and you’ll see skill, hope, resourcefulness, and dreams taking shape and manifesting all around you. Probably as close as your neighbours on the other side of the planet thanks to modern tech (thank god that was all in place by those eggheads in time for isolation) Gratitude is a good place to start, just sayin’.

Experience comes in when you’re having to draw on your network, but fortunately, it’s never too late to build a new one. “It’s all about the people.” That’s a phrase I hear a lot and most often from my own lips. I’ve never made a good movie without good people, I need them, I appreciate them and show them my gratitude whenever I find an excuse. Having grown up making zero-budget movies on my own, I know how valuable good people are in production. I just revamped an old script I had lying around which has a cast of fifty-seven! Obviously, it would cost a fortune to pay everyone and it would take at least six months and a lot of prep to get such a project off the ground but fortunately, my experience is ‘people’. I show up, I’m nice and do the work in front of me, don’t take more than I give and I go home. I’ve never underestimated the value of being professional. People ask me back, not only that, they ask me to meet them for coffee, to review scripts and ideas that they have. I have become a reliable mentor, a friend, and a professional by simply following the aforementioned steps.

So that’s what experience has given me, but that’s only the start, experience has meant that when I have a new piece of work, I have a long list of trusted people in the industry that I can call on to review it or take part and to get experience all I’ve done is stay connected to my network with regular communication and make one progressive move every day toward completion. So, this could be the completion of a script, a conversation with someone about an idea, development of an idea, even switching on a camera and filming myself reciting a monologue, poem, or rant. Before lockdown, I took actors headshots and helped actors with self-tapes for auditions, I may not have been filming an epic movie but it kept me engaged, and for the times that I was filming, I was learning, developing and progressing, plus the fact that the actors I was working with had a new story about their own experience which I benefitted from.

Right now, we’re stuck at home and we want to make a film so what can we do to progress. First of all, WRITE! When lockdown is over, producers are going to be desperate for good content so make that happen. I’m doing online table reads of scripts and working online with my cast and crew (who I know or know through friends or websites like Starnow, The Mandy Network etc) and we’re pitching our ideas in and developing so that when lockdown ends, and fret not friends, everything passes, I will be first out of the door with a developed idea and ready to roll. This is a great time for development, whether it be of the self, the spirit, the mind and of course your best-selling novel with script and audiobook attached. One thing I’m proud of is that a book I wrote ages ago, I self-published in isolation, wrote the screenplay and then spent hours in my closet with a mic I bought off amazon and duvets nailed to the walls for soundproofing, recording the audiobook version of the novel onto Garageband. I now have a full package to pitch to investors. Honestly? I spent weeks thinking about how hard it would be to do it, and three days actually doing it. I’d say ‘Now is the time to create’ but, let’s face it… NOW is always the time to create, no one will do it for us but with help, we can make anything happen.

I’ve never done anything great without the help of others but while I’m on my own, that doesn’t have to change, there are countless Instagram indie filmmaker profiles to connect with, the Raindance Film Festival runs daily Instagram live interviews with filmmakers, which are like courses in themselves, the Raindance Film School also runs insanely affordable courses online so there are ways to stay current and connected. But if there’s an idea rattling around that beautiful mind of yours, tomorrow literally never comes, Now is the time, just make a start, write the first sentence even if you don’t know what the first sentence will be, just show up to the page and let it speak. The other thing about watching things like Instagram live feeds is that they’re interactive and you can ask questions directly to the film maker who online usually being interviewed by festival founder Elliot Grove, so you end up feeling connected and in the loop. Many people are experiencing low mood and feeling unmotivated but that’s for a whole other article! The thing to remember here is… Stay Connected!

As for gaffer tape, well… You can fix most of the world’s problems with it but sadly there’s not much it can do about lockdown laws. As long as you bear in mind the golden rule of film making ‘Never, Ever show up to a film set without gaffer tape’. All will be well when we do finally break free and get these new projects out there. Stay safe and see you again soon!