The day has come, and whether Britain is ready or not, we find ourselves departing the European Union. In ‘celebration’ Raindance has created a list of top 10 EU films; from Greece to Finland, Ireland and Poland. Our top 10 EU films range in genre and language with pristine quality and remarkable creativity. These filmmakers made the most out of their budget, with some films made under $100,000.

Renos is a professional waiter, ambiguous, lonely, a meticulous observer of people. When he unwittingly becomes entangled in the mysterious disappearance of his neighbour, he is led on a ride that will alter his well-kept routine and change his life. A film equal parts character study and paradoxical murder story.

Directed and Written by: Steve Krikris

A surreal French comedy drama about forty-something dad Philippe Mars, whose well-meaning and balanced approach to life is challenged by increasingly chaotic, and in turn, absurd circumstances. Dealing with his rebellious children, an angry work colleague and his artist sister, this film is a darkly comic take on family life.

When a broke-hearted busker (Glen Hansard) meets a struggling Czech girl (Marketa Irglova) on the streets of Dublin, their instant connection leads to the discovery of a shared musical bond that allows them to transcend the banalities of their everyday lives. Hansard’s character still lives with his father and repairs vacuum cleaners as his primary source of income, while Irglova supports her mother and child without the aid of her estranged husband who remains in their homeland. As their friendship progresses the duo direct their efforts to recording a demo in an effort to preserve something beautiful.

Djam, a young Greek woman, is sent to Istanbul by her uncle Kakourgos. There she meets Avril, a French girl who has run out of money on her travels. Generous, sassy, unpredictable and free, Djam takes Avril away to the island of Mytilene — a journey made of music, encounters and hope.

Four very different people live in the same building but avoid each other because of their very different lives. They would probably never exchange a word, but misfortune pushes them towards each other. Slowly, and even painfully, they begin to open up to each other and recognize the essential humanity they share.

Children of the Night – Italy, Belgium

Giulio, a seventeen-year-old from a well-to-do family, is sent to a boarding school. In this isolated place in the Alps, where iron-clad rules limit all contact with the outside, he makes friends with Edoardo, who is rather odd. Their friendship is sealed by frequent escapes at night, when the surveillance of the students seems to lapse.

Alice, a thirteen year old girl, lives with her father, Adam, in a huge house in the woods, following a car accident in which the girl lost her mother and part of her right arm. Alice is enclosed in herself. She hates her father and blames him for the accident, she hates rehabilitation and she hates the new electronic arm that she has to carry and can barely handle. In addition, she has a strong bond with Beatrice, a female wolf dog that talks through an electronic translation device that it carries around its neck, whom she calls Mom.

One day, Alice and Beatrice find a mysterious cubic artifact among the trees near the house. Through the cube Alice receives messages from who seems to be her future self, warning her of dire events that she must stop. In this context, Adam also carries a very different game: he finds Erika and Paul, two young brothers wounded and helpless that he hosts and protects from a mysterious pursuer, David. Alice is then prey to suspicion and mistrust; she and Beatrice are wary of the new inhabitants of the house and the unhealthy atmosphere that seems to have engulfed them all. After a terrible event, Alice, shattered and confused, wants to go back and change what happened. This time the cube could help her to alter the past.

In this romantic and sometimes melancholy comedy Aurora, a commitment-phobic party animal, meets Iranian Darian one night at a hot-dog stand in Lapland. Darian is running from death and Aurora is running from love. They need each other in order to finally stop running. 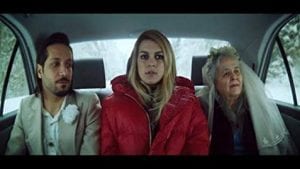 A girl roams through the city looking for a place to sleep, but between yoga studios, art galleries, and the beds of strangers there is no space for her. A postmodern comedy in pink and blue.

All These Sleepless Nights – Poland