The making of Everybody Flies - Raindance

The making of Everybody Flies 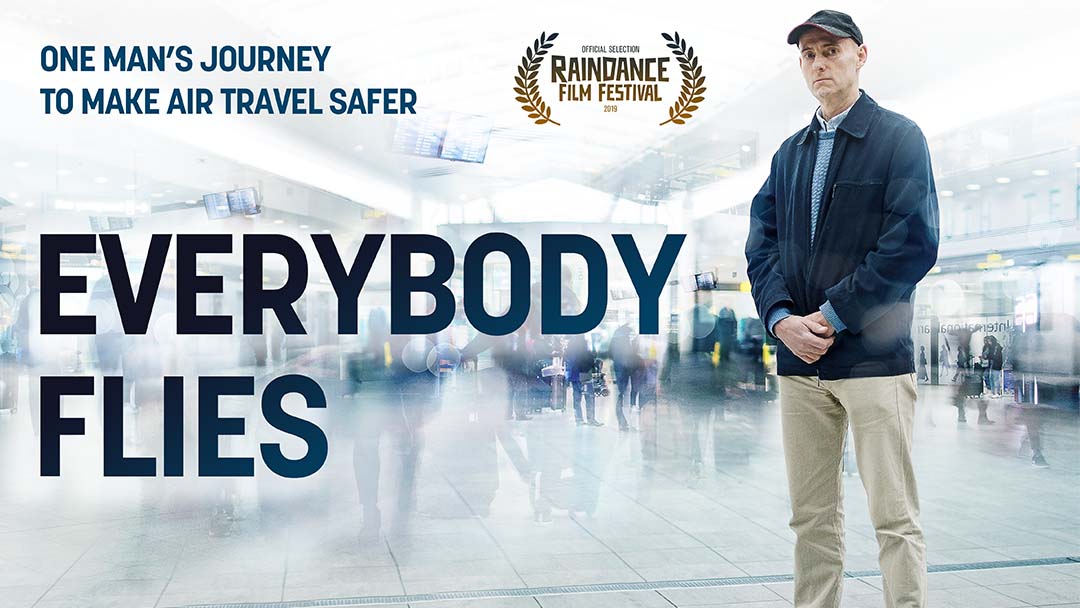 In 2015 I had just finished the independent feature ‘A Dark Reflection.’ The film was a feature film based on the ongoing issue of contaminated air on aircraft. The last film to be shot on Fuji 35mm and was Britain’s biggest co-operative film. Everyone worked on the film for shares in the film. The film had a good cast of volunteers but not big enough names to get a wide scale theatrical release. A journalist contacted me soon after we finished the film and said it was an important issue and perhaps I should make a documentary about the issue. He said clearly I knew the issue inside out, from my personal experiences as an airline captain in a former life and so started the journey.

Many of the crew on ‘A Dark Reflection’ helped in the making of the documentary at the start. Initially it had a working title of ‘Aerotoxic’ but over the years this became two different films. The first ‘Everybody Flies’ looks at my journey and gives an audience an overview of the issues, the sequel called ‘American 965’ looks at the 1995 accident of American Airlines flight 965 near Buga in Colombia.

Form having made documentaries in the past and seeing how vital a good sales agent is to a project, early on, I approached a number of Sundance or Academy Award winning documentary sales agents. One of those was Cinephil, based in Israel. I went out to see their boss Philippa Kowarsky and showed her some of our early footage. She was brutally honest and said it wasn’t up to the standard she was looking for. It was hard to hear but looking back it was an honesty that helped shape the film. She saw the passion I had and agreed to rep the film. She suggested we get a good editing team together and after some good input from Mark Silver we hired Emiliano Battista (Urest / 3 & ½ minutes – 10 Bullets) as supervising editor and Dan Swietlik (An inconvenient Truth / Sicko) as an editing consultant. Their input transformed the film. ‘American 965’ has not yet appointed a sales agent, as we only completed the last of the filming on 24 February 2020.

As both films look at the very powerful aerospace industry we decided from the start to appoint media law firms with extensive expertise. Smith Dehn who did Citizen Four that won the Academy Award and Lee & Thompsons of London, who had cleared our very first documentary in 2007 that triggered a call for a Public Enquiry into these issues.

Raising the significant amount of money to make both documentaries has not been easy. There are so many things we would have liked to have done but could not afford to. With some key archive news footage costing US$100 a second, it really focuses the mind in post. That said, we have been lucky to have crew around the world give us reduced rates to help get these films made. Most funding has come from donations from airline crews and passengers or from our own company.

I have produced/directed over 30 documentaries and 3 features over the last 14 years but nothing prepared me for some of the interviews in these projects. To sit and listen to people tell you how they were passengers on a flight and hit a mountain at high speed at night in the Andes and survive, was surreal. You are talking with people who have been somewhere in life you will never go. Their contribution was priceless. To get these interviews, I feel interviewees need to know you know your subject matter back to front. Only then do they know their contribution will be used empathically and not sensationalised.

As one of the two films ‘Everybody Flies’ tells a good part of my story, it was important to me that I did not direct myself and so on ‘Everybody Flies’, I had a young co-director called Beth Moran. Her mum works as cabin crew and she is a pilot herself. This ensured she already had a basic grasp of the world of aviation. She was not shy to speak her mind, which helped ensure the film was not too technical and easy to understand for any passenger who ends up watching it.

Investigative documentaries are evolving stories and many people interviewed ended up not being in either of the films for many reasons. Sometimes their stories are covered by other people, sometimes people have a great story to tell but on camera they don’t come across well and on occasion that thread in the film doesn’t go anywhere so its redundant.

Filming over the last 5 years has taken place in numerous countries ranging from Colombia, Australia, USA to Switzerland. ‘Everybody Flies’ premiered at the Raindance Film Festival in September 2019 and started its selected UK theatrical release on 26 February with Everyman Cinemas to be followed with an Academy Award qualifying US release from 19 June 2020.

Tristan Loraine was a British Airways captain when he was ill health retired after breathing contaminated air on aircraft, a year after completing them Ironman Triathlon. Keen to tell his story and increase public awareness of a design flaw in aircraft; he retrained at Raindance and the National Film and Television School (NFTS) and set up his production banner Fact Not Fiction Films in 2006.