Successfully Producing a Feature on a Budget: Best Lessons Learned

Group photo of Arazo at Capital One Cafe in DC. Left to right: Artem Koker, Nathan Cushing and Sohrab Jafarzadeh.

When the coronavirus first took the world by storm, many businesses large and small took a hit, with the small ones being in the majority. One such example was Arazo Media, a local media agency run by Artem Koker and Nathan Cushing. The two co-founders who were used to creating corporate videos, photographing weddings and running ad campaigns, quickly found themselves losing the majority of their clients and work. Within about 2 months of initial lockdown, the two ended up losing over 90% of their entire business.

With much frustration, the team quickly started looking for new ways to pivot and change everything about what they were doing. One such change which came from Cushing, was to document the entire process themselves as individuals and as Arazo to tell and share the story of what they were going through. What started a small idea, quickly became a full fledged documentary which would not only share the stories of Arazo but of so many others from every walk of life that have been impacted by the pandemic, large and small.

Koker and Cushing quickly put their heads together in the war-room to strategize and figure out the ultimate goal of such a massive undertaking. They decided to work backwards from where they wanted to be. The goal: share 20 intricate and personal stories of individuals that have been impacted by the pandemic for better or for worse. Cushing and Koker wanted to create a documentary that would be evergreen and not change based on new facts and ideas that came out about the pandemic. The raw unfiltered personal stories was that exact answer. It would be something that would stay relevant and be fascinating to watch five, ten and fifteen years later. The ultimate goal would be to sell the project to video on demand companies like Netflix, HBO, Hulu, Amazon or AppleTV. Without having an actual budget though, taking on a full documentary would be extremely challenging. This however is where innovation and the opportunity lies.

Since Koker and Cushing already ran a media agency, they had a full team that was talented in the arts so they decided to reach out internationally to find out who among their own (or those they knew) would be interested in taking a great risk for potentially a greater reward. The risk would of course be to take on a project and working for free but the reward would be to be a part of something bigger than themselves. To create a great work of art that highlights the struggles of real people and have the possibility of greater rewards if the project succeeded.

After searching and asking around, they found Sohrab Jafarzadeh who had previously worked on sets with films like Captain Marvel and Season 2 of Ozark who agreed to be the DP of the project. Victor Fujimoto, joined as 2nd Cam / BTS shots while Koker took the Director’s role and Cushing as the Producer and Arazo Media being the production house. They also added Jay Ology who would provide support on the back-end editing side of the project.

Sohrab Jafarzadeh and Artem Koker setting up to film Hybrid and his story. Photo by Kenny Cushing.

The next 6 months were spent by the team filming, editing and producing the entire documentary. Challenges rose and fell along the way. Filming everything in 4K RAW proved to be far too much for the small team to handle. Hard drives quickly piled up with over 15TB of footage from 3 days of shooting alone. The computers simply could not handle that much importing, analyzing, editing, rendering and exporting. This was an indie project afterall.

Arazo quickly shifted to regular 4K and continued with their filming schedule. The entire project was edited in multiple sets of computers and laptops; both PC and Mac. In the beginning, Jafarzadeh and Fujimoto started by cutting up and rendering the best shots and interview clips in Premiere. That was followed up by then sending those exported files to Koker who would put together the whole story in Final Cut Pro X. 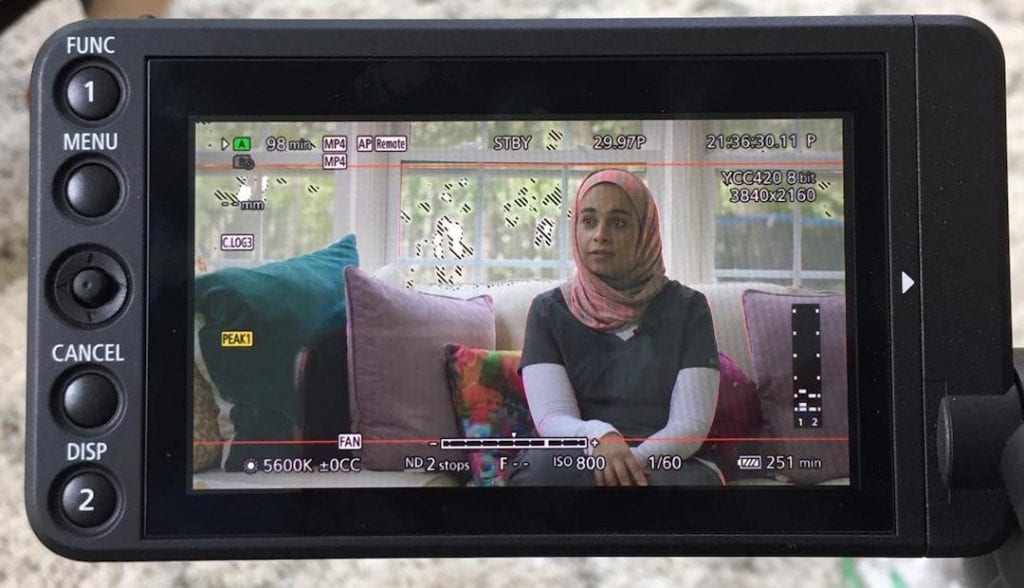 Behind the scenes view of the interview with Mary B. Photo by Artem Koker.

At that point, the only cost was food, gas and a few interviews that Arazo had to pay for. Aside from that, the next biggest cost was music. Finding good, professional music tracks alone is a difficult enough task, but finding that same music at an affordable rate with a world-wide commercial-use license is almost asking for a miracle. Arazo didn’t give up. After doing a ton of research and comparing multiple sources, Koker decided to use Premium Beat as the main source of their music. Every single track in the documentary was found, currated and purchased from Premium Beat. After further research, they found the best license which only came out to be only $50/track for full commercial use which is an absolute bargain if decent research is done on some of the other prices out there. They found a further discount by waiting to buy all the tracks in bulk when there was a summer sale on all the Premium Beat products. 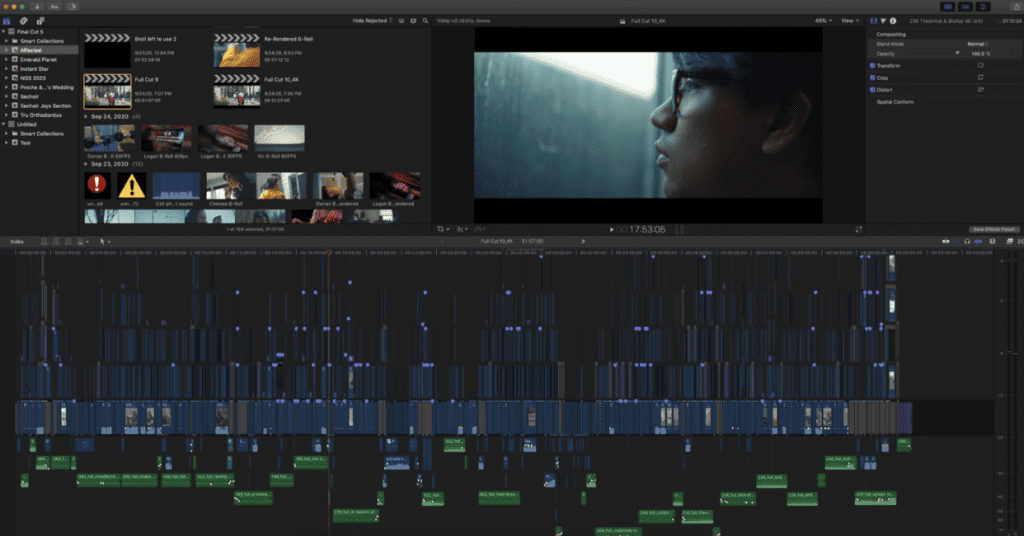 With the challenge of music out of the way, the full documentary and trailer finally came together. A six month gruelling process of editing has finally ended. But the game was not over. The next obstacle was all the film festivals, critical reviews and the costs surrounding it all. In order to find every possible film festival under the sun that their documentary would quality for, Koker and Jafarzadeh started drinking coffee and pounding away on their keyboards. Koker created a full spreadsheet on Google to summarize all the festivals out there. They both quickly realized though that FilmFreeway is the best way to submit to pretty much every single festival out there except SXSW. Also with a FilmFreeway Gold monthly membership, Koker was able to save 20-35% of the regular submission costs as well by submitting for all film festivals in bulk. The plan was to essentially only use FilmFreeway Gold for a month and then cancel their subscription. The team then cut further costs down by uploading the full project on YouTube (free) vs Vimeo (minimum $89/year) and used YouTube’s detailed analytics to look over exactly who watched their film, when, where and for how long to track all the engagement that every single critic or judge had when viewing their project. 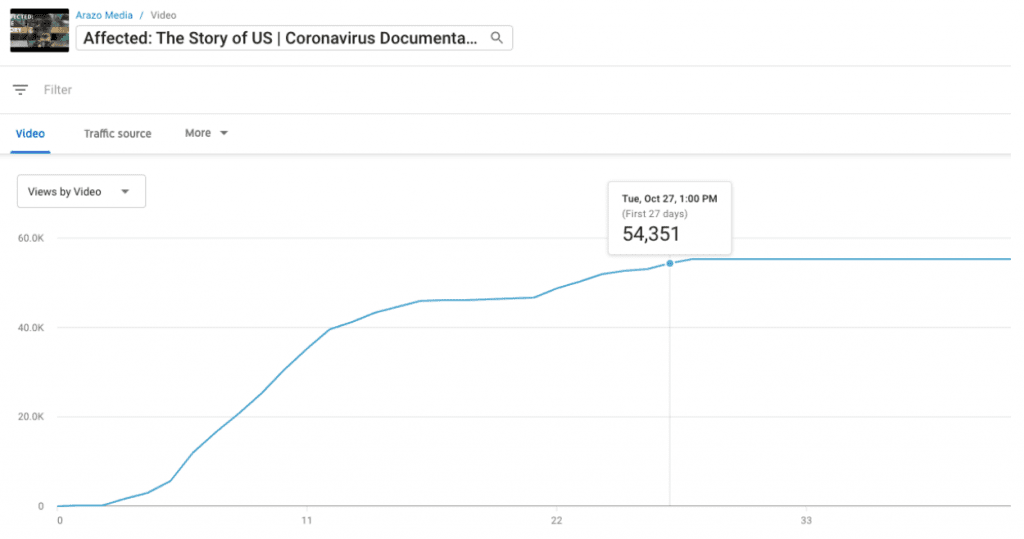 Screenshot of data collected from the trailer campaign. Photo by Artem Koker.

Arazo’s next big challenge was marketing and promotion. Koker and Cushing decided to create a hybrid strategy to market the film. They utilized both grassroots strategies and paid promotions to increase exposure for the project. The entire team started to avidly share everything to do with their documentary on Facebook Facebook Stories, Facebook Groupchats, Instagram, IG Stories, IGTV, Tumblr, Blogs, Direct Messages to Friends, Family and Followers, Whatsapp Group Chats and random chats on social media where they would paste links to watch the trailer and learn more about the project. Getting certified on IMDb, publicizing the project on FilmFreeway and having an official website contributed to the growth. Also adding calls to action in every post and message and getting everyone to like, comment and share the project as well helped a lot. The team further drove more awareness for the project by getting all the cast and people involved to share it with their followers, friends and family. Overall the project was doing well.

Paid promotion was the next step. Koker started experimenting and running YouTube ads through Google to generate more awareness for the trailer and the project as a whole. With everything said and done, the team was able to generate over one million impressions, 59,000 views, 1,200 hours watched, with over 1,154 engagements across 51 different countries.

The last major challenge that the team faced was finding distribution channels and access to either direct lines of places like Netflix, HBO, AppleTV, Hulu and Amazon or finding sales representatives that pitch to those places on a regular basis to work out a deal for them to bring team Arazo in for a pitch meeting in exchange for a percentage of the sale itself. Good rule of thumb is to never give away more than 20% of your project. If you can stay below 10% then you are golden.

An agile approach was the way to go. Plan A was trying to reach out to all the VOD providers directly and pitch to them through heavy Linkedin scrubbing and using Google Chrome extension app called Apollo.io which allows you to be able to view the email addresses of all LinkedIn contacts you have not even yet connected with. After looking at each individual company and their employees Koker and Cushing were able to start reaching out more heavily to them. Plan B was to find sales reps and work with them to get into the room with the big dogs. Plan C was to self-distribute. Starting with Plan C, there were many websites and places for distribution but the best one for the team became Film Hub with no upfront fees and only a 20% cut from revenue, that became the best last alternative. Plan B and A all came together through again heavily Linkedin and personal networking approaches. After many months of networking and emailing, the team was able to find a few good sales representatives and a few contacts that were willing to give them a shot at places like HBO, Netflix, Hulu and Amazon.

Arazo lining up the shot for Chelsea’s story. Photo by Kenny Cushing.

All in all, the project and journey of this small team of first time filmmakers has been nothing short of incredible. If you found this story interesting, leave a comment below or share it with someone you think can benefit from this knowledge. For more on Arazo and their documentary Affected: The Story of US, visit their website.

Jade Tartaruga is a writer on all things related to cinema. From edgy dramas to juicy documentaries, she analyzes it all.