6 Reasons to Appreciate The Sound of (Film) Music - Raindance

6 Reasons to Appreciate The Sound of (Film) Music

Creating an authentic atmosphere while making a film is always a challenge – and sound is (some would argue) 50% of the whole experience. When you are making a film it might seem like a grueling task to put your energy into the sound, but always keep in mind how important it is when you are watching a film. Eerie atmosphere, creepy sound effects, comedic music or just a classic dramatic theme (think Titanic) can take your film from 0 to Intense. So put your headphones on and start researching some sounds to better your audience’s filmmaking experience. This time around, homemade pizza survivors and musical legends, Kathryn & Dušan von Trapp are here to highlight the most important aspects of sound in filmmaking:

Think about your soundtrack

D: Do you have a certain genre you’re trying to make? A nicely written soundtrack can add a lot of layers to your film and make it better. Think about this year’s Oscar winner The Shape of Water and how that beautiful cover of the classic song You’ll Never Know by Renée Fleming painted the film and brought out Elisa’s love for the Amphibian Man to the screen. Try and find aspiring musicians and artists that create music and give them a platform to shine through your film, while also making the experience of watching the film you made a collaborative process. Films like Baby Driver depend on soundtrack to advance the story, so think of innovative ways you can use sound in your narrative.

K: Think of how much the Jurassic Park soundtrack evokes a sense of wonderment when you hear it. Or the instant terror that comes from the motifs in Jaws and Psycho. An iconic soundtrack can really help cement your film’s place in the audiences minds. Make it memorable and ensure it resonates with the emotions you want your audience to feel in that scene. Emotions, the feelings that the audience leave your film with, that’s what will really test your film’s success. And a hell of a lot of that is down to your soundtrack.

D: I started working with Mike Gunn on sound (a freelance composer and multi-instrumentalist) last year while at film school, and we built a very strong work relationship because our ideas were the same and we listened to each other. He has done the music for all my films since, and we’re working on multiple projects as I write! This is the music he created for a short drama I made last year:

K: Sound effects have the potential to make or break your film. It can determine the believability of what you’re portraying on screen so never underestimate its importance. Inadequate sound mixing and foley could ruin your film for audiences. Think about Dunkirk – the visuals are great but they would be nothing if the sound wasn’t truly believable.

D: There is a plethora of sound effects you can find on the internet, and good quality ones usually cost money. If you have a good sound recorder or a sound recordist with the right equipment, you can try and make sounds yourself. Get creative and think about what objects you can use to make really authentic sounds for your story. Check out this amazing video to get a sense of how important it is: https://www.youtube.com/watch?v=UO3N_PRIgX0

Dealing with Sound in Post-Production

D: If you are editing yourself, or your own film you have to keep in mind the editing of sound. You have to learn and be aware of sound mixing and sound levels in order to have a good film come out of the edit. You might think that your film is done after you synchronize the rushes with the sound, but that is just the beginning. Use a good machine and quality headphones to make sure all the levels are the same, and that they make sense when you watch the film.

K: A common error with films that I’ve seen during pre-selection, is that sound is usually an afterthought. My guess is that a lot of issues are a constant “We’ll fix it in post” – but then the problems are harder to fix than on set. A main reason films don’t get selected for festivals is that the sound quality isn’t good enough to screen. So, do your film justice and don’t scrimp on sound recording as it’ll save you a lot of time in post if you get it right on set. Also, make sure you press record*. Just saying. *Totally has never forgotten to do this

D: We keep talking about how sound is really important, but there still is this stigma in the film industry about sound and the excitement of doing it. Most of us watch films because of the visual aspect, the performances and beautiful imagery but we seem to disregard sound because it seems non-tangible, even though it makes the whole experience a lot better. In the industry, sound people are highly sought after and they always get paid!

Use the right microphone

D: Think about where you are putting your mic or where the characters are positioned on screen? Is it a wide shot? If so, try and use radio mics or if it’s a close-up use a boom operator to help you out. Make sure your actors are wearing materials which won’t affect the sound if your cast moves around a lot, the clothes can make rustling noises. 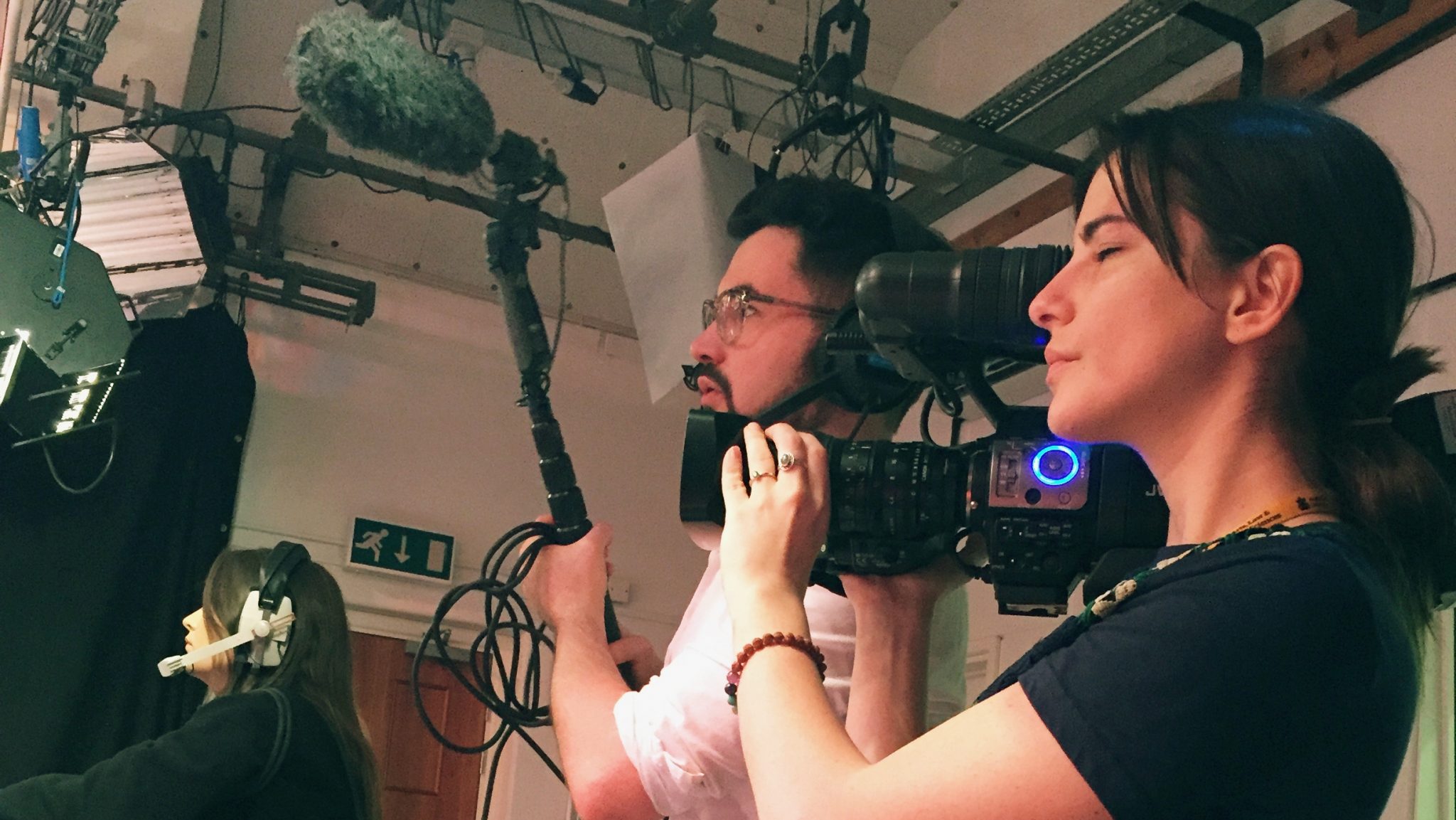 K: Who can forget the iconic example of this in Singing in the Rain? However dramatic that may seem, the same issues still happen, and it’s so easily avoidable if you plan ahead – both in terms of location and costume, so that you can minimise any issues before they arise.

Make use of your location

D: If you are inexperienced in sound, or not working with a professional sound recordist always make sure to get atmosphere sound from the location you are shooting in. Taking a couple of minutes at the end of each scene and recording the atmosphere sound of the room will save you in the edit. Make sure you remember this, and also to have all devices on airplane mode! While researching for the location you want to film at also keep in mind where it’s situated. Last year I shot at a location which was near an airport, and we had to plan the day out properly and make sure the planes didn’t interfere with the recording.

K: This is where you might want to check out our Tips for Filming on Location as you can never underestimate the importance of a recce. You need to know whether there’s any outside factors that could interfere with your sound before deciding to shoot there. It’s better to find out before than turn up with all your crew and cast and spend ages finding a suitable alternative.

Why not try your hand at taking our Power of Film Sound course in July! Read more about Kathryn here!

Dušan (pronounced (Scooby) Doo Shawn) joined the Raindance team as Campaign and Community Manager in 2018 after pursuing an extensive career in reviewing cheese. After acquiring a BA in Media and Marketing in Serbia, he completed an extensive year in filmmaking which lead to an MA in Film and TV Production from the Cambridge School of Arts. You can find him vigorously supporting indie filmmakers whilst pursuing a career in acting at the same time.