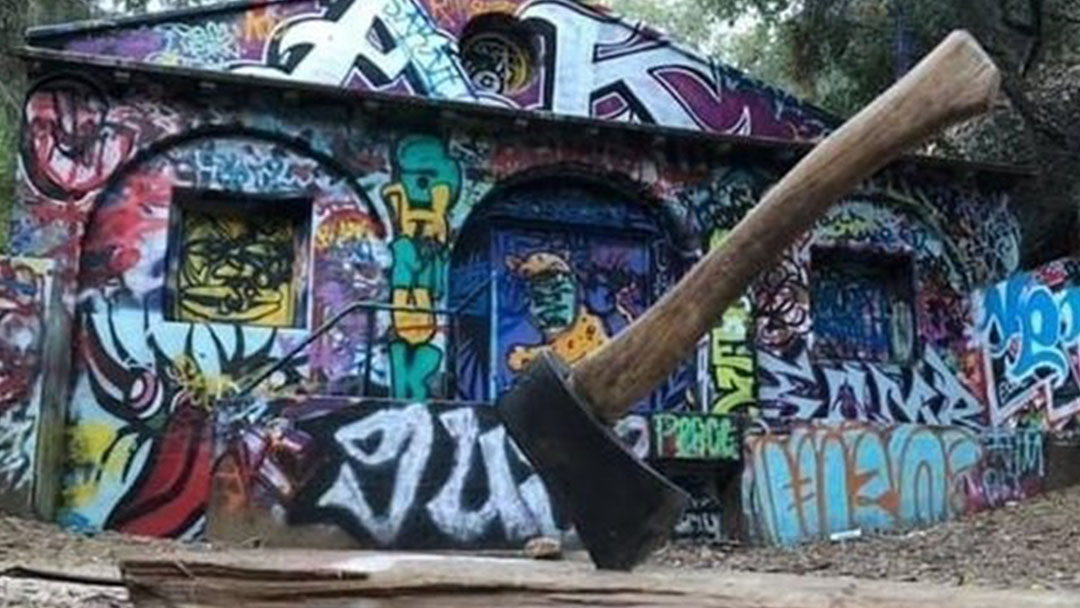 So you want to shoot a horror and you’ve got everything organised: your script is polished to creepy perfection, your actors and crew are lined up and all blood-stained props are on standby. You just need somewhere scary to shoot. It needs to be preferably quiet, out of the way, but still easy to get to. Unfortunately, your town is pretty much short of haunted houses, creepy cemeteries or deserted corn fields. So where are you going to find this perfect location?

One idea is to always look for somewhere you wouldn’t walk past at night alone, and which you’d see as a character in its own right in the film.

One of my favourite locations was a Brighton underpass which was soon to be closed down due to being unsafe, so made the perfect horror shoot. Our DOP Jack Roper utilised it perfectly, getting atmospheric closeups of cobwebs hanging from a cracked fluorescent light, the lead’s footsteps in the dust as he marches further into the abandoned darkness, and shots of a cracked mirror so we get a distorted angle of the killer approaching in the gloom.

This 4 minute short, called “U Never Listen,” was shot in less than a day for less than £500, which is why it ended up winning the Hollywood Screenings Film Festival award “Best Bang for Your Buck: best horror short made for under a thousand bucks”. Deep down, I know I’m never going to get an award with a better title…

Alternatively, good locations can also be literally on your doorstep. I live in a south London 1920s Art Deco block which at night looks suitably atmospheric. My friends have shot inside my flat, so it’s played host to shorts involving a killer child, a doomed Halloween party, and a midnight date interrupted by a murderous ghost. One summer night I had two horror shorts I wrote and produced shot back-to-back in the stairwell, “Lilies” and “Wrong Day”. 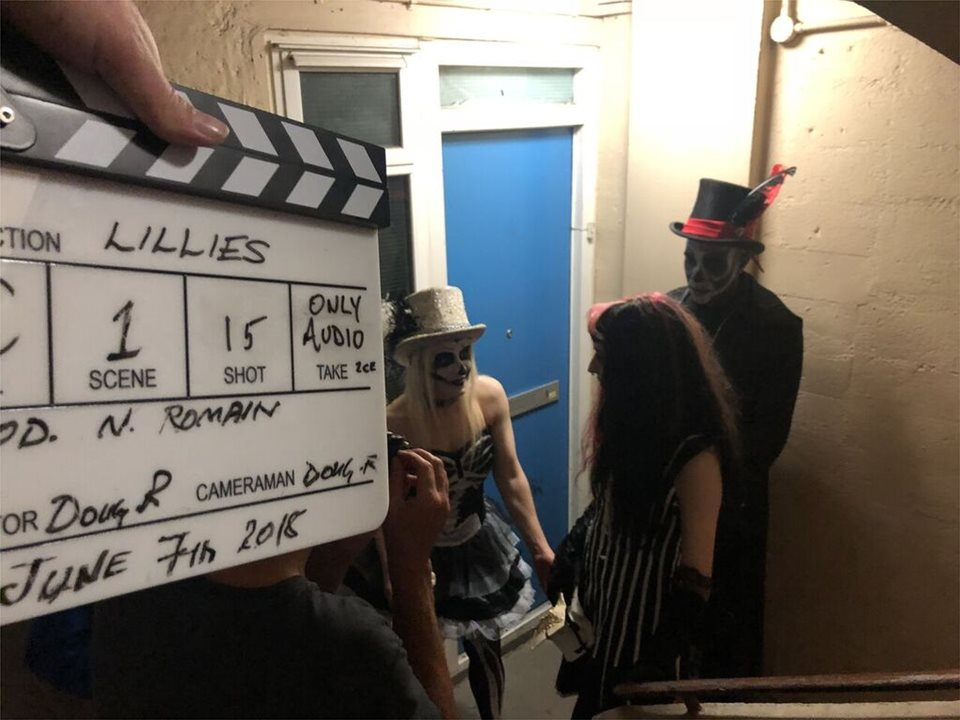 The only way I could have pulled this off was down to the hard graft and professionalism of actors Claire Greasley, Phoenix James and Kevin D. Stones, who between them played five characters.

Kevin said: “That little Peckham stairwell saw a lot of supernatural goings in that one night shoot! I played a different character in each and we ended up getting 14 awards globally for both shorts, which we didn’t expect but was really nice.”

London director Fredi Nwaka knows the importance of authentic UK horror locations.  His horror-comedy “Are We Dead Yet?”, which premiered at the UK’s biggest horror festival FrightFest, was set in two genuine castles, Caversham Castle in Berkshire and Standon Hall in Staffordshire, as well as London.

Fredi explains: “Most castles are said to be haunted, but Standon Hall was also was said to have some non-living inhabitants and had featured on Most Haunted. We were mainly shooting at night so none of our cast and crew wanted to be alone at any part of the shoot! Both locations look great in our finished film.”

One of my favourite horror locations was Pluckley in Kent, once described in the Guinness Book of Records as the “most haunted village in England”. I used or referred to quite a few, including the Red Ghost lady, an old gypsy woman who fatally set fire to herself, a headless horseman, and a phantom highwayman who met his end at a corner always afterwards referred to as Fright Corner, giving my short its title. Pluckley was the perfect horror storm.

Alternatively, you might walk into somewhere on holiday that just lends itself to horror. Last year I visited Santa Monica Pier in Los Angeles and got a unnerving warning from a fortune teller machine, which ended up inspiring my found footage short “Dark Soon”. My two leads get another fortune teller warning before they leave town – which of course they completely ignore!

When I visited again earlier this year, I stayed in a Venice Beach hostel decorated with a genuine 1970s look: ancient furniture, huge funky vases stuffed with faded plastic roses, ripped up paperbacks on Charles Manson scattered on the green sofas.

I used this location as a base to shoot LA actor Nick DeLillo and Brit actors Malcolm Modele and David Dooner. The last two play filmmakers shooting a docu about unlikely locations for Valentine’s Day dates. After getting some shots of them in the hostel, we went to Griffith Park Zoo, which has been closed since 1966, on the outskirts of LA. There we shot in abandoned cages and deserted fake “caves” that the animals had been kept in, now littered with rubbish and covered in graffiti.

Malcolm and David’s characters find some Valentine’s Day style gifts – as David’s character uneasily asks: “Who leaves random roses in a place like this?” – as they start to realise they are in fact being stalked in the Zoo by their own killer “date”.  So these two off beat locations made a perfect backdrop for “Vicious Valentine”.

Michelle Coverley, producer and writer of the period thriller short “The Wick”, agrees that finding the perfect location is vital. Her location was West Sussex’s Weald & Downland Living Museum, a village of 50 recreated buildings dating from the 13th to the 19th century, which let her actors connect with their characters.

Michelle explains: “When we shot in the Museum’s house and barn we felt a strange historical energy lingering in the bricks and mortar, which helped our cast get into the right mood and enhanced their performances. It was an amazing location for “The Wick”, as it was completely authentic and got everyone in to the best mindset. The National Trust and Sussex Wildlife Trust outside locations nearby ​where our heroine is chased did exactly the same. We all loved working there.”

So the perfect horror location may be closer than you think, and doesn’t have to be that strange at first glance. Just ask yourself if you’d like to be alone at midnight there – and if you wouldn’t, work out a script around why you wouldn’t.

Nina Romain hates to admit it, but subconsciously must loathe Valentine’s Day, as all her favourite horrors consist of candy-bearing, mask-wearing killers just waiting for 14 February to get even, and even produced a Los Angeles found footage short about a Valentine’s Day spent in a deserted San Diego zoo – being stalked by a killer. Someone get this girl a good soppy romcom boxset!
Her horror shorts tend to be shot half in the seedier side of LA and half in the darker side of the UK, including the UK's "most haunted" village. Last year she AD’d on a Covid-safe rom-com and created some microshort horrors, ranging from a pandemic nightmare in lockdown London (www.raindance.org/shooting-in-a-ghost-town) to a party no one leaves early…or alive. She’s currently looking forward to eating the chocolates her more-popular flatmates get on Valentine’s Day, and reviewing a lot of scripts while waiting for Spring to arrive. For more information, please visit: www.girlfright.com