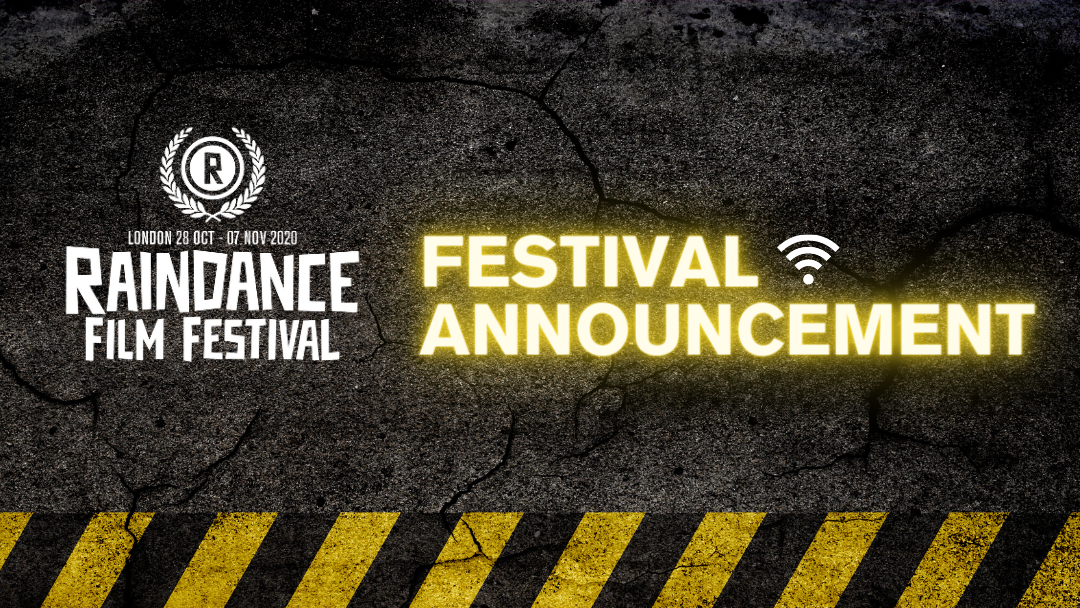 Against a backdrop of an industry affected by this global pandemic, Raindance will continue to support and inspire film fans and the broader film community, enabling them to thrive during these difficult times. Britain’s arts and culture organisations have long recognised the need to adapt to survive when faced with the likes of funding cuts or changes in the way audiences engage – and like its compatriots throughout the UK and beyond, it has been necessary for Raindance to dramatically adapt in 2020 to meet the extreme challenges presented by COVID-19.

Raindance views social distancing and self-isolation as a creative challenge to refresh and reinvent the festival experience. Raindance also recognises its role as a necessary platform for UK and international independent filmmakers to connect to UK audiences. With this in mind, the Raindance Film Festival will safely adapt to an online experience for its 28th edition (28 October – 7 November 2020), to run in parallel with a number of live activities, including industry sessions, panels and gigs at various central London venues. The result will be an innovative hybrid of remote engagement and live activity.

The online content of Raindance will be powered by Shift72, who have delivered world-class online film festivals for the likes of Visions du Réel, SXSW, Cannes Marché Du Film and CPH:DOX.

Throughout the 11-day festival, audiences can expect a wide-range of screenings and panels designed to bring insight to independent filmmakers, along with a special retrospective on the yet-to-be-announced Raindance Icon Award recipient for 2020 (the 2019 recipient of the Raindance Icon Award was Olivia Colman).

“Raindance will reinvent the festival experience this year,” says Raindance founder Elliot Grove. “By safely moving to a virtual engagement, we will do whatever it takes to support and celebrate independent film, while maintaining the atmosphere and connectivity of an authentic Raindance experience. Raindance will continue to be a place to discover the kind of fascinating, multi-faceted films and filmmakers who thrive in today’s crazy world of indie film.”

Raindance is proud to announce further support for UK and international filmmakers with a new festival pledge for its 28th edition, ranging from UK geo-blocking to the deferral of festival benefits for filmmakers – see below for full details of this pledge.

Winners for the Best Short, Best Animation Short and Best Documentary Short will qualify for Oscar® consideration. British films accepted by Raindance may qualify for BAFTA consideration. In addition, British features and shorts in the official selection will be eligible for entry for the 2020 BIFA awards.

For more information or interview requests:

Geoblocking: All films in the selection will have a UK geo-block. Other elements like Raindance industry forums and panels will remain available worldwide.

Restricted access: Rights holders will have the ability to exclude press and journalists according to their release and publicity schedule.

Ticketed Festival Screenings: All films will have the option for limited screenings (premiere with live Q&A and repeat) or to remain available for the duration of the festival.

Live Q&As: The festival will coordinate with filmmakers to present a live Q&A with UK audiences or to pre-record remotely a Q&A with a member of staff.

Official Competition and Awards: All films in competition will be adjudicated by Raindance jurors, and winners will be announced during a live awards ceremony. Previous jurors have included Olivia Colman, Sean Bean, Martin Freeman, Christopher Eccleston and Tom Waits to mention but a few.

Premiere Status: Raindance will uphold the relevant premiere status as World, International, European and UK to all films in the selection.

Production Timeline: When accepting submissions for the 2020-2021 festival cycle, Raindance will temporarily waive policies limiting a specific time frame to include films produced during the 2019-2020 cycle.

Industry Sessions: Raindance will coordinate industry panels with UK and international film professionals to enrich and encourage a dialogue with filmmakers.

Festival Benefits 2021: Raindance will defer festival benefits to all filmmakers selected for 2020 over to the 2021 season as well, including passes and industry meetings.The Distributor Clause: All films selected by Raindance will participate in virtual screenings in an official ticketed capacity, and not a traditional VOD formal, and therefore will remain eligible for future sales opportunities.