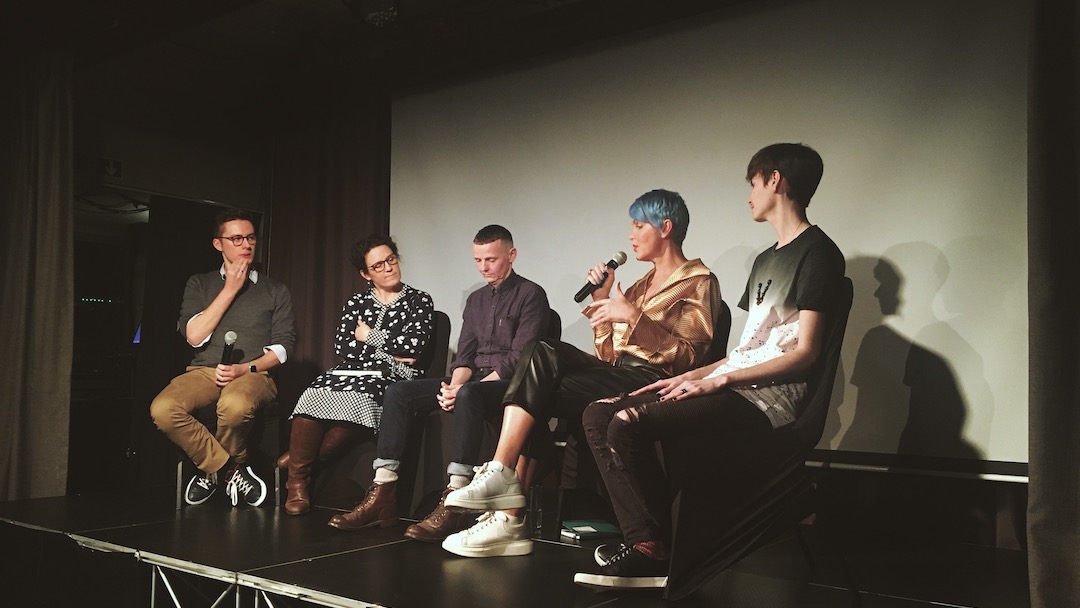 The February edition of the Raindance Film Club was a joyous occasion. On 18th February, Century Club hosted the screening of the beautiful documentary Finding Bobbi, which was first screened at the 27th Raindance Film Festival in 2019. The event was done in collaboration with TransCreative, an organisation that works to counter negative coverage of trans issues and identities in the media through their mission to “tell our own stories”. To be trans and have a voice is both rare and vital. Over the last three years, TransCreative has created important platforms to have these voices heard.

To kick off the proceedings, we screened the top 5 short films that entered our Valentine’s Day filmmaking competition: #SixtySexySeconds. The idea was simple: in under one minute, make a film in the spirit of Valentine’s Day, post it on Instagram, and the best ones will win the competition and be screened at the next Raindance Film Festival. This goes to show that you don’t need a broad canvas the size of The Irishman to paint a beautiful picture. In fact quite the opposite: art strives under constraint, and the talented filmmakers that entered the competition showed that bite-sized storytelling is a fantastic art form.

Have a look at the winners here.

This heartache-filled but ultimately uplifting documentary, directed by Ava Karvonen and Scot Morison, follows the triumphant life journey of a transgender actor named Bobbi Charlton as she returns to the stage after her transition late in life. Twenty-three years after her last performance in front of a live theatre audience in a male role, she returns to the stage in the role of Aunt Eller in an LBGTQ+ production of Rogers and Hammerstein’s Broadway classic Oklahoma. This film follows her journey in the run-up to opening night. Finding Bobbi is a sensitive exploration of transition, self-actualisation and what it means to be a transgender creative in the performance industry.

The panel consisted of filmmakers, activists, and speakers who are working right now in the film and media industry, exploring issues of gender, fluidity, and selfhood right here in the UK. Joining the conversation were Fringe! Queer Film And Arts Fest programmer and director Kai Fiain, co-Founder of Gendered Intelligence and TransActing project lead Catherine McNamara and TransCreative Founder and Director Kate O’Donnell. The panel was completed bio superstar model Krow Kian, who was the subject of the opening night film at the 27th Raindance Film Festival, Krow’s Transformation.

The conversation unwrapped the film and explored the idea of performance: Krow discussed his experience modelling before his transition, and since, and how, like Bobbi in the film, performing in front of people became a self-actualising and authentic experience after becoming his true self. Performing before was sometimes a way to run away from himself, and he found power and joy in presenting his true self to the world afterwards.

As Finding Bobbi explores a community theatre production, the conversation then delved into the need for safe spaces. After all, if in a big cosmopolitan city like London, safe spaces are easy to find, how can we ensure that those spaces are provided elsewhere? The panelists argued that it was important for those safe spaces to stem from grassroots movements. Marginalised people should, as much as they can, create their own safe spaces for no one but themselves. This is how we recharge, and this is how we connect.

These spaces should also be home to creatives, who should be able to work and express themselves there. This is why spaces dedicated to the LGBT community are essential. “They don’t need to be opened to the mainstream”, argues Kai Fiain. “They can attend, but they don’t have to have a seat at the table.”

Should the majority’s conversation not be imbued by the voices of the “angelic troublemakers”? After all, that is what representation is all about. “There is a lot of power in being a trans person just standing there, telling a regular story. We don’t have to explain what trans is to make a case for our agency”, argued TransCreative founder Kate O’Donnell. There are of course different shades of representation that creatives can harness to tell their stories.

“Anger is a very good fuel to continue telling our stories”, added Kai Fiain, to nodds of the other panelists. When righteous anger is felt by a marginalised group, this needs to be expressed. And the evening concluded with the panelists agreeing that when creatives feel this anger, it becomes fuel to tell more stories, better stories, but always their stories.

Join us for the next Raindance Film Club in April 2020.