I got this fascinating press release from a fellow Brit now living in New York. I was so impressed by her journey, and by the quality of her work I thought i’d print it here as a case study about a social impact web series, and also as a little Raindance plug to a fellow filmmaker.
Enjoy.

As millennials, they navigate through life trying to find a purpose, money, a good lay and identity while partying their sorrows away.

The 5 episode web series has released Season One on REVRY, an LGBTQ inclusive positive digital platform. It is available on Amazon Fire, Roku TV, Apple TV and on REVRY’s main streaming app.

If you would like more information about FML Series or an interview with creator, Viktoria I. V. King and/or the cast, please contact cyne59inc@gmail.com 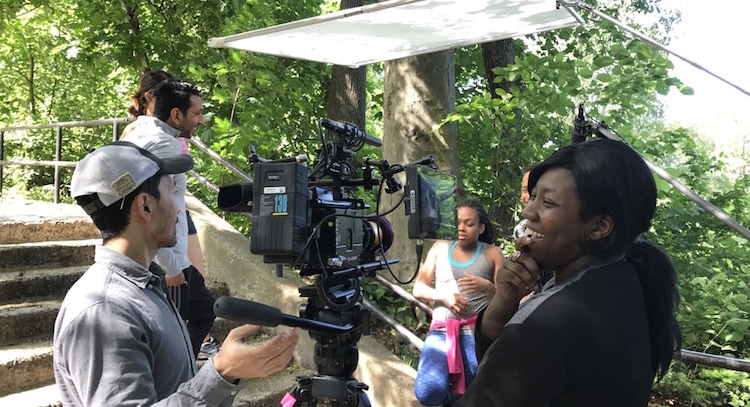 How did this start?

I initially wrote FML to be a TV Series with having six full scripts written. When we tried to pitch it to studios, agents and the like they all wanted to see how it was going to look first and then think about it. I decided not to wait and do the series myself on limited funds and resources but I was determined to make a series to the best of my capabilities and it turned out great.  We won awards, got selected into mulitple film festivals as well as having a distribution deal with REVRY that makes FML Series accessible through Apple TV, Roku TV and Amazon Fire. (https://revry.vhx.tv/fml )

This show has taken from my friend’s experiences, my experiences and the inspiration of the ferociously talented Michaela Coel and the insatiable Phoebe Waller-Bridge; who both tell stories in the way in which similar to my style or an aspiration for my style. Both of them have heavily influenced FML Series and the inner comedian in me as well.

I’m Viktoria-Isabella King although my professional name is Viktoria I.V. King.  And I am a multi-ethnic, award-winning British-American Director, Producer, Writer and Photographer. Having produced and directed content (Theatre, Commercials, & Film) both in the UK and the US; also being a modern dancer and a classically trained actress which rounds out my versatility in the arts, I suppose. Ha! I’m also very proud to be the Creative Director and Executive Producer at Cyne 59 Productions (cyne59.weebly.com); a boutique creative production company. LAMDA graduate.

My work and creative eye is greatly influenced by my international background and world traveling. As a largely visual director, I creates stories with a focus on displaying truth and humility. My films have had themes surrounding or about:  broken people trying to connect, identity, sisterhood, healing, social & political relevant stories and self-discovery . I also say I’m a storyteller first and a narrative director second.And I’m someone who believes in quality over quantity.

My psychological feature film, “Gray’s Disconnect” which is due to debut on Amazon Prime in December of 2018, is still in the film festival circuit and it’s that film that led me to be a member of the internationally renowned organisation, Film Fatales. I’m also a part of NYWIFT ( New York Women in Film & Television) and New York City Women FIlmmakers organisations.

The next step for “FML Series” is to continue to have it go through the film festival circuit, continue to win awards and then start prep for Season Two in late 2018/early 2019.

The next steps for me is that I’m currently in production (slated for film festival release in late September of 2018) for a short Dramatic/Sci-Fi film called “Echoes in Silence” which is about five women who become a manifestation of one woman go on a journey to find themselves and end up finding sisterhood along the way. It’s a film that is like Beyonce’s “Lemonade” meets Fight Club with “Moonlight” visuals. It stars Ashanti J’Aria, Elena Grosso, Brie Brewer, Tony-Ann Nelson and myself. This film will be submitted to all big film festivals such as Sundance, Cannes, Raindance and the like.

Also, I’m in pre-production for two feature films (that I’ve written and will direct) slated for production late 2018/early 2019.

One is called “A Girl Who Got Shat On” which is a British Comedy film and it’s about a female aspiring comedian and how the most horrible thing that goes wrong in her life; a setback; becomes the most unexpected set up for her life that she’s been looking for. “What really happens after the shit hits the fan?” . This film was inspired by the humour of Phoebe Waller-Bridge ‘s “Fleabag” and Michael Coal “Chewing Gum” with an unlikely twist.

The second feature, is a film entitled, “War & Peace” and it’s a Dramatic Thriller film that is about a troubled therapist is forced to deal with her past as she meets three women from different walks of life and as they delve through their issues, they unintentionally end up with healing and sisterhood. Cassandra Seidenfeld is attached to star and we are currently attaching other name stars Asian/South Asian to this film in the upcoming month.

I  plan to move back to London in 2019 to further pursue my filmmaking career and because I miss it dearly. For more of my work/updates can be seen on my website: viktoriaivking.com/