by Daniel Korth | 24 July, 2019 | In Our Opinion, Promotion, Marketing and Distribution | 0 comments

I like the poster for ‘The Dark Knight Rises’ (2012, dir. Christopher Nolan)  because for me it sums up what makes Batman likeable. The low angle makes him look very dominant – mighty, like he is. One gets a sense of Bruce Wayne, the man himself, in that the figure is staring down in a brooding way.

However, even Batman here is dwarfed by the massive fire bat symbol above him. Although it is not directly linked to the antagonist Bane, it could be taken as foreshadowing of the fact that the superhero will meet a villain even more powerful than he is in the film. The fire bat could also be interpreted as a signification that batman struggles to contain his own power, and that this (like fire) is dangerous and uncontrollable.

Unfortunately, even though this poster for ‘Solo: A Star Wars Story’ is one of my favourite posters, the movie itself is one of my least favourite films. That aside, this poster contains everything to excite Star Wars fans, and just movie fans in general. It promises that ‘Solo’ is an authentic Western (as it should have been!) because the paper is sepia toned and frayed around the edges, just like the classic ‘WANTED’ leaflets which asked for gunslingers to be turned in.

Which is another point. Han Solo himself is the main and biggest figure on the poster, and the way he holds his blaster in this Western-themed image makes him look like a Clint Eastwood character.

Looking further, the warm yellow light catching the edges of Han Solo and Chewbacca evokes in me a particular remembrance of 60’s ‘spaghetti Westerns’, which featured almost selectively the desert rendered by a warm, golden colour palette.

This poster for ‘Get Out’ (2017, dir. Jordan Peele) contains a visual representation of everything that makes the film great. First and foremost ‘Get Out’ is a horror, which is made very clear by the character’s terrified expression, and the subtitle which says: ‘JUST BECAUSE YOU’RE INVITED, DOESN’T MEAN YOU’RE WELCOME.’ This is a very eerie phrase, as it takes the average person’s expectation of being invited and therefore welcome, and lets us know that here at least the ordinary is not as it appears. It’s also so knowing that it seems almost like a parody, which leads me onto my second point.

Another major player in the film is comedy. Perhaps it is just me, but in this frame the character’s expression is slapstick, almost comical. The mise-en-scène of his face is so over-the-top it seems to be tongue in cheek.

Lastly I will mention what makes this movie stand out the most; its outstanding social commentary and themes. As the story is about a black man visiting his white girlfriend’s family for the first time, Peele took the opportunity to include lots of metaphors to do with and stabs at social racism. The white characters in ‘Get Out’ see themselves and black people as very different and separate. They think they are superior. In the poster, this is represented by the two very distinct and unblended sections; black on the left and white on the right. It also stands for our world today, and the fact that there is still segregation on a social level.

Raiders of the Lost Ark 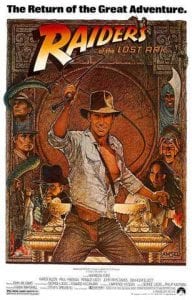 The reason that I like the poster for ‘Raiders of the Lost Ark’ (1981, dir. Stephen Spielberg) is that it sums up all of the brilliant classics I have seen from the 1980’s, a decade that appears to me to have been a great era to live in. Films such as Indiana Jones here and Star Wars were the popular action flicks back then, and this poster’s format was the standard for such movies.

This poster gives a sense of the wild, bonkers action contained in ‘Raiders’. Indiana Jones himself draws the eye, being the biggest element in the image, and it is clear that he is an action hero due to his whip. In the background, a variety of characters can be seen who all share one thing; comedically OTT expressions. One traditional sword fighter grins madly, someone looks terrified, a man stares nobly into the distance…

‘Raiders of the Lost Ark’ itself contains vastly exaggerated action, acting and characters, so the vaguely hammy vibe this poster gives is appropriate. I am drawn to this poster and other similar ones because everything about it screams ‘EIGHTIES CLASSIC!’ at me. 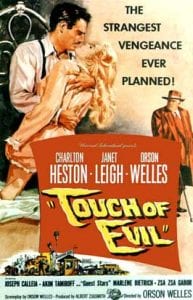 This original poster for ‘Touch of Evil’ (1958, dir. Orson Welles) beautifully captures the sense of almost alive sinisterness present in the genre generally, and in this, the greatest of all film noirs. In a nutshell, film noir is a stylised blend of sex and violence. Here, the main protagonist embraces his wife in the foreground, whilst Quinlan, the movie’s shadowy antagonist, lurks in the background.

Disturbingly, sex and violence are quite literally combined in ‘Touch of Evil’ with the suggested gang rape of the woman in the poster. Perhaps this is foreshadowed here with the violent character in the background and two characters on a bed in the foreground. Or perhaps, as I said, it is simply to give a sense of the genre. The shadow behind the bed also shows how dark things will get.

I’m fifteen, and I think film is the most authentic medium. I aspire to be a film director in Hollywood, because I’m quite creative and like to organise things. I’m at Raindance for work experience, so I can get another perspective on films in a professional environment. Watch my films on Youtube. Follow me on Instagram