Every screenwriter wants to write a page-turner. Whatever genre you are writing in, you need to have compelling characters, an impeccable structure -that is not necessarily three acts-, tremendous action, and a universe that your reader, later your audience, will not want to leave. And a crime drama is a tricky one to navigate.

This is true of any writer, for the screen or otherwise, and in any genre as well. However, some genres are more rigorous with their codes than others. A family drama will have to have extraordinarily compelling characters (see Home for the Holidays, by Jodie Foster) and may not need as much action as a thriller.

What makes a universe believable is the specificity. When writing a crime drama, this is a particular element that you shouldn’t miss out on. Crime dramas come with codes for the writing, as do all genre. They also come with a particular lingo that characters speak that is specific to the milieu and profession.

If you, dear writer, are at a loss for words: we’ve found the resource to change that.

Writer Jennifer Dornbush put together an invaluable resource for anyone aspiring to write a crime drama, and take it to the next level. It is called Forensic speak: how to write realistic crime dramas, and is published by Michael Wiese Productions.

Not only is Jennifer Dornbush a writer in her own right, she is the daughter of a medical examiner and investigated her first fatality, an airplane crash, when she was just ten years old. A lifelong fascination for crime has since followed, as has an attraction for the mysteries of Hitchcock and the Coen Brothers and lighter television content such as Pushing Daisies or Monk.

Forensic speak is an essential resource for any crime drama writer. Crime shows rule the episodic content industry and there is a procedural drama for every personality and every writer. Breaking into that field will prove tricky so you need to be equipped. This book will help you differentiate your laceration from your incineration, as well as help you figure out a fabrication. 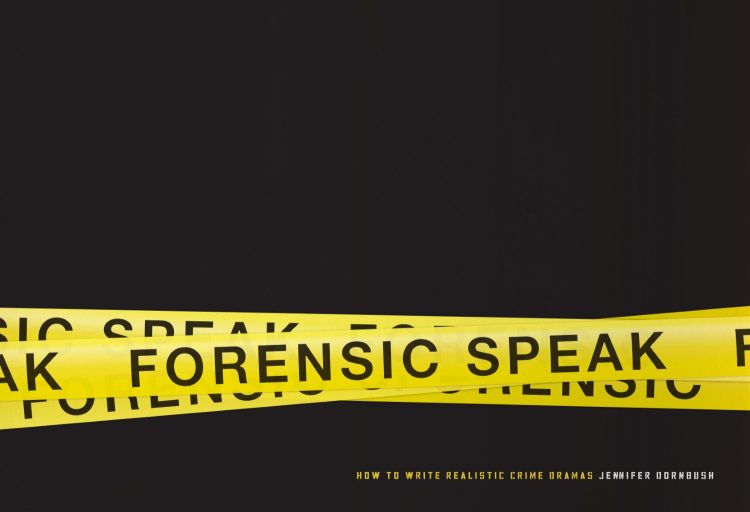 A useful and essential book to add to your reference library.

The structure of the book is impeccable. The chapters break down the themes that you will need to explore, such as the types of evidence, what a coroner looks for in a body, toxicology, guns, and courtroom speak. You’ll be able to browse through topics easily as you need to explore them. The mere exploration of this book will spark your curiosity and may also open new avenues for you as you write your screenplay.

To make forensic terms even more palatable to Luddites and novice crime aficionados, Jennifer Dornbush illustrates every single terms by using stills from films or series where we may have seen them used before. You’ll see a “close-range shot” from Fargo, you’ll understand about “poison” from Breaking Bad (where else?), and you’ll know all about “exigent circumstances” from Traffic.

Ms Dornbush put together an outstanding reference that has not only been endorsed by writers and producers from the CSI and Law and Order franchises, she’s also put it to use by consulting on shows such as Prison Break and Hawaii Five-O. She also applied her wealth of experience to her first feature, God Bless the Broken Road, due to be released in 2018, and her debut novel, The Coroner, which is an extremely compelling read.

Forensic speak is a terrific reference for every crime writer and a book that will spark the creativity of everyone.

Learn all the foundational principles of crime and mystery writing in our Crime Writing from the Trenches of Hollywood Masterclass – Jennifer Dornbush’s first teaching visit to the UK!