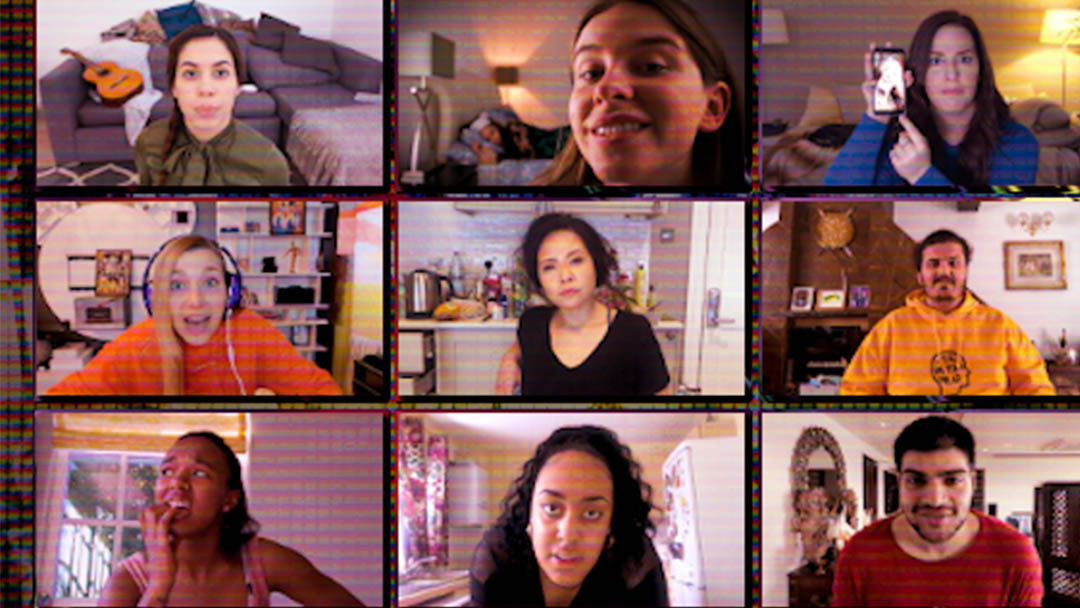 I’ve just arrived at the station after weeks touring around the UK on trains, buses, taxis. Press, social media, TV; everyone is talking about one thing COVID-19. People look worried, suspicious and irritable. Like in an improvised drama exercise, everyone walks around “exploring the space”, avoiding contact with each other. It would be funny, if it wasn’t tragic.

Images of the 1998 film “Fallen” pop into my head. Denzel Washington plays the role of police detective John Hobbes, who is chasing a fallen angel turned serial killer. The killer has the ability to inhabit people by touching them. Denzel spends the entire movie totally social-distancing. Suspense builds with human proximity. Whenever the fallen angel, Azazel, possesses a new victim, they start humming an old Rolling Stones tune. “Time is on my side”. And it feels like time is indeed on COVID-19’s side. Starting today, I inhabit the character of John Hobbes.

There is a tragic supernatural thriller vibe going on, I receive a few phone calls about projects being cancelled, postponed or suspended. I fear that, not only can anyone get infected by a deadly virus, but if I manage to survive that’ll mean I’ll have to pay rent, which I now can’t afford. The last phone call I got this morning was from what was supposed to be my upcoming theatre gig: directing 3rd year drama students from a London university. I suddenly imagine myself being their age, ready to conquer the world, to become an actor, to tell stories… and pandemic hits. How sad and heartbreaking. I start to feel angry, probably because that’s how I process sadness, but that’s for a different article. How dare this pandemic take away the people we love? How dare it not let us touch and be touched? How dare it take our hope? Enough! I tell the university that I have a proposal and that I’ll get back to them in the evening.

Anger and frustration feed my creativity. I call one of the best writers I know, with whom I’ve done wild projects that required insane deadlines and unachievable targets. My partner in crime, Juan Echenique. Transcript of the phone convo:

Me: “So, I’ve got 13 drama students, all in different locations, 8 different countries, different time zones, 13 different cameras (mobile phones and a few DSLRs), barely any professional filming equipment. None of the students has ever shot a film. Do you think you could write something that could justify all of this, embrace it, and make a film that is NOT about Covid-19? Oh…and you just have a few weeks. We’ll have to write and shoot as we go along.”.

Today I reveal my plan to the drama students. I’ve only met them once in person before lockdown. Hopefully they will all have at least a mobile phone with a camera. I work a lot with people who don’t, so I’m prepared to explore other options.

Me: “Hi team so I guess you’re all worried about what the final performance piece will be…(long dramatic pause) We’re making a feature film!”

Entire class: raises their hands, clicks on the clapping emoji, the wave emoji, I see some of them jumping up and down. Might I note, this is all happening in silence because I’ve muted the mics, but  manage to unmute quickly enough to hear cheers, applause and, for the first time in what seems to be an eternity, a breath of excitement and hope.

I’m going to stop writing location because this will continue on for the entirety of the project.

We’ve just finished doing our two weeks of R&D. Juan and I have watched our actors do the monologues of their choice. They’ve taken direction from me live on Zoom in front of the rest of the team, they’ve shown us safe locations that respect lockdown and social distancing measures. I’ve seen their equipment, and we’ve tested their tech skills by asking them to shoot with their devices. These two weeks have been all about learning who they are as actors and focusing on what resources we have instead of what we don’t have. Writing begins!

What day is it? Where am I? Is this a dream? Why am I still wearing pyjamas? Why is my living room covered in post-its? It’s 4am and I’ve fallen asleep on the sofa. I’m woken up by the glare of my screen, a huge spreadsheet with a to-do list is giving me a condescending smile.

Juan joins our Zoom rehearsal. His hair is going wild, I cannot stop staring at it. He looks like Doc from “Back to the Future”, this is not the first time I see him like this and I know it’s a good sign. He’s managed to write the first scene for each of the 13 characters. Now we know who these people are.

This week I’m rehearsing one-to-one with the actors. We focus on the acting, but they also show me their “sets” and send over video and audio tests so I can advise on lighting, framing, wardrobe, sound. These actors are also their own crew. Some of them are all alone, at home, isolated with the only company of a camera and, if they’re lucky, a tripod.

We’re watching everyone’s scene 1s today, together. My internet connection is crap. Downloading 56 video and audio files has challenged all my buffering meditation techniques. I only breathe in. I see all the technical issues, ALL of them. I’ve got 13 different sound sources (different mics, different textures, different noise levels…), 13 different cameras, 13 different lenses… This is a director’s technical nightmare. But… the actors, I look at the footage, at the acting… they are present, pouring their hearts, trying really hard to do their best.

They say “action” and “cut” to themselves. The title of a file reads: Scene 1 take 42. Not only do these actors have to think about all the tech stuff, learn lines, acting notes, set, wardrobe, sound, lighting… they also have to rewatch their scenes and choose the versions they think are the best, and send them over to me. If there is a specific hell for actors, it must look pretty much like this.

I tell them who has to reshoot, usually it has to do with sound and lighting issues but they understand and are more than willing to give it another shot. We’re all in this together.

Juan and I discuss storylines, the character arcs, what we think about these first scenes and what the actors are giving us. They are our muses, after all. We feed from what they give us. It’s a very lively process.

This week it’s scene 2. We rehearse over Zoom throughout the week, we do our “dress rehearsal” as we would do in theatre so I can spot any potential tech issues and give them acting notes. Something’s happened. Rehearsals flow, there are more questions about tech stuff, they’re asking about framing. Have we past a learning curve? The footage is much better.

Scene 3. They don’t have any tech questions. They do have a lot of questions about how to give their character a well deserved arc and ending. It’s as if we’re approaching the last day of the shoot for the actors. This week the actors know that, once scene 3 is shot, they’ll have to let go of their characters. Their beloved lockdown companions.

During the next weeks, there are a few inserts to be shot which the actors take just hours to send me at times. They’re so confident sending footage, I’m feeling really proud of how far they’ve gone.

Now, it’s just Juan and me. Different from theatre, in film, the actors and crew are done at this point. For directors and post-team we’re barely halfway through the process.

During the next weeks until our deadline Juan edits and composes music. Yes, we’ve decided to have original music for our feature film. Why not? I’m sending notes, references, and a lot of scene-chopping is happening. We spend endless hours rendering, sending tests, and examples to each other. There are so many technical difficulties that consume all our time. Just when you think you’ve gotten rid of one issue, another one appears. Again, I think about “Fallen” and the Azazel scene when the devil just keeps on passing through people, from hand to hand, each person who has been possessed sings the Rolling Stone’s tune. Denzel is truly losing it now.

We made it. It exists. It’s emotionally and creatively drained us completely. I’m sleep deprived, anxious, excited, happy, proud, and waiting for the render to finish on time. Coming up with the title took longer than you would expect, considering we’re the same people who can make a feature film in a few weeks: MESSAGE SENT. Why the title? You’ll have to wait and watch it.

We’ve spent the past month waiting for Premiere, waiting for rendering, waiting for the internet, waiting for our laptops, for software updates, waiting for file conversions, downloads, uploads… A lot of it has to do with working on two old laptops, on being working class artists who can’t afford faster equipment, but that’s never really stopped us.

We’re now sending “Message Sent” off to film festivals. First on our list is Raindance!

But, this is still a really tough time. Both my industries, film and theatre, are struggling to survive right now. They need us all to hold tight and reinvent ourselves. But we’re not over yet, we never are. I think about “Fallen” again and I start humming the song that Azazel sings everytime they possess a new victim, and I hear Mick Jagger singing “Time is on my side”. I feel my lips moving, and I hear the tune echoing in my kitchen. It’s me, humming that melody. I’ve gone full circle, reclaiming what was lost. As long as I keep on fighting the good fight, as long as rage inspires me to create, as long as I surround myself with the best, most motivated people, time doesn’t belong to any pandemic; time is on my side.

Fumi Gomez is a freelance film and theatre director. Her work is focused on groundbreaking storytelling, seeking new expressive ways and blending influences from all around the world. She is heavily invested in filmmaking that speaks from a female, intersectional, culturally diverse perspective, in a way that is unique, political and entertaining.

Creator of Making Films; a guerrilla filmmaking group with over 1700 members. She has curated a total of 57 short films in the last year made on a zero budget, each month and screened at a London venue.

She is a freelance associate artist at the National Youth Theatre. Co-founder of Horatio Productions and the Science Fiction Theatre Festival in London.
Website: www.fumigomez.com