How To Promote Your Online Movie Screening | Raindance

How To Promote Your Online Movie Screening

In the era of COVID, we’ve all had to pivot our plans. If you envisioned a glitzy, star-lit film premiere in a posh theatre, you know this first-hand. However, you can still achieve your grand vision for your movie release. With screen time reaching record highs, you can successfully promote your online movie screening to a global audience.

People are stuck at home and internet activity is surging at explosive rates. One recent study revealed a 70% increase in online entertainment viewing and a 12% increase in streaming.

That’s a leap you can cash in on, but you’ll need smart film promotion strategies to reach viewers.

Get ready to roll out the digital red carpet, because people are consuming entertainment en masse. With travel restrictions and many still sheltering in place, you want to tap into this newfound exposure. But how will you get them to attend your film screening?

In this guide, you’ll learn strategies to promote your online movie screening and gain maximum exposure.

Establish A Homebase For Your Movie

Every product needs a website, and your movie is no different. You’ll want to provide a resource for fans and viewers to find information about your film and upcoming events.

Make your website as interactive and user-friendly as possible.

In this day and age, you don’t have to be a web designer to build a website. You can have a website live in a day with affordable, user-friendly platforms like Wix and Squarespace.

IMDB is the entertainment industry’s authority database for all things related to tv, film, and streamed content. You’ll use IMDB to list all the essential details about your film’s plot, cast, and production.

And that’s not all. Any press coverage about your film will also show up on your film’s IMDB page. A bonus is that there are ample tools to create a culture around your movie.

There are interactive features designed to engage your audience members like trivia games, ratings, reviews, and lists.

You can add your movie to existing lists or hire someone to create listicles, including related titles in your genre.

Lists are an excellent way to build awareness about your film so that it shows up as a recommended movie title when people browse within your film’s genre.

Get Your Audience Involved (And Invested!)

You’ve likely got invested friends, family, and fans who’d love to partake in your film. A great way to bring them in the mix is to involve them in your production and promotion efforts.

Here are two movie marketing campaign ideas to get your audience involved:

When you get passionate people involved in your film, they become invested in its success. Ultimately, they crossover from being fans to partners, and are more likely to help you promote your film screening.

Publicity stunts often have an air of sleaze and scandal. However, there are plenty of ways to create buzz without compromising yours (or your film’s) reputation.

When done properly, you’ll get people talking about your film. You might even get a few mentions in local or international news platforms.

The franchise isn’t hesitant to intercept live broadcasting and commercials with unconventional plugs. Nor is it shy to put a skull, a poop emoji, and an L on a giant billboard. Put together; these three emojis translate to “DeadPooL.’ 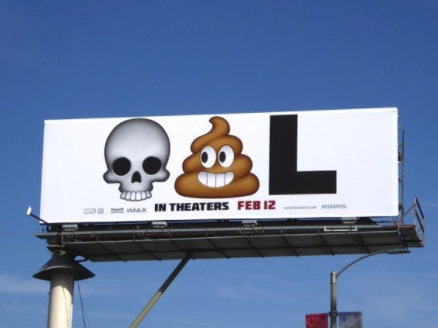 Promoting your online movie screening may be as simple as a few cleverly arranged emojis and a viral Twitter thread. Point being: think outside of the box, and don’t be afraid to try unconventional ways to get people talking about your film.

Here are a few ways to build hype on social:

There are no limits to the options for movie promotion through social media! 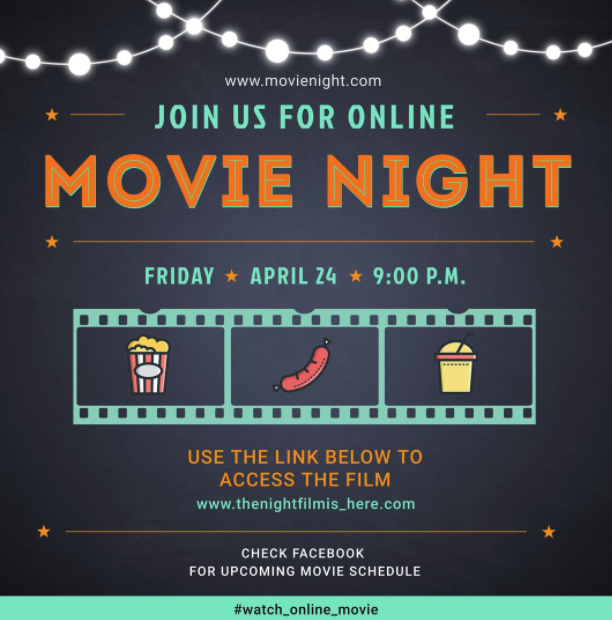 If you want to get movie fans to watch your film, you need to get movie buffs to review it. A clever approach is to submit your film to online movie blogs.

Blogs like CinemaBlend and MovieWeb are excellent platforms to gain exposure and get media coverage.

Even a couple of reviews in respected film blogs can do wonders to promote your film.

Additionally, get viewers and fans to review your film on sites like Rotten Tomatoes. The more eyes on your film, the better, and reviews endorse your film and make it more watchable to prospective viewers.

Try not to feel disheartened about bad reviews because they accompany every film. If people are writing about your film, it means you’re putting it out there and doing your part to build awareness! 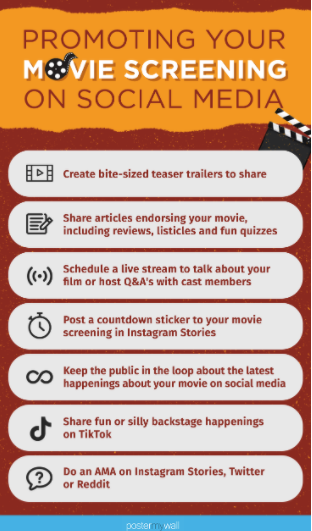 The digital stage is set, and now it’s time to screen your film! Fortunately, more viewers are tuning in for online entertainment than ever before.

You can benefit from this increased engagement by recruiting new viewers to your online movie screening..

Use these film promotion strategies in the months leading up to your screening to create buzz, build a fanbase, and above all, shine a much-deserved spotlight on your film.