Filmmaker in the world of CG Filmmaking | Raindance Film School

Being a Filmmaker in the World of CG 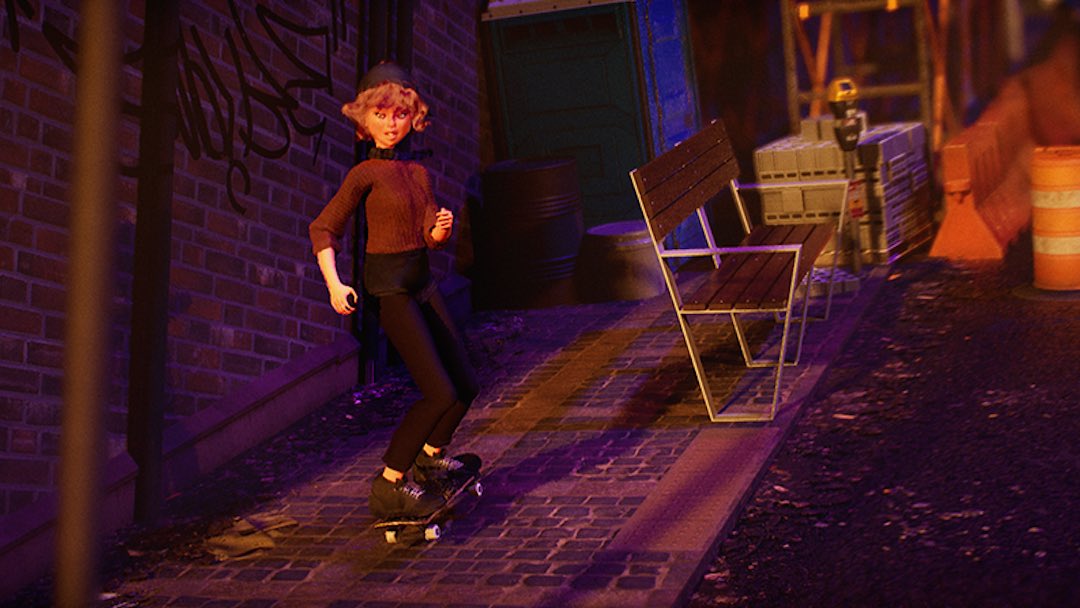 For this article I’m going to explore my process of taking an idea from scratch and developing it through a 3D pipeline of CG filmmaking to final. Early in the creative process it can be very daunting to figure out just what you want to create, the story you want to tell, the art direction, etc. There are so many variables to narrow down. Personally when I am making a short I like to learn and try something new each time to keep things fresh. During this stage I will find inspiration and reference. There are multiple resources to choose from online such as Pinterest or Google Earth but it can also be inspiration from your own life, whether it’s from your town or home, a game, a movie, or a story you’ve read or heard.

Where to start a shot

Early on in development for this shot I knew I wanted it to be set in the street hills of San Francisco. Knowing the geography early on helped a lot with what ideas could be played upon from this setting. From that I wanted the character to be a skateboarder and for the time of day to be golden hour as that is a very iconic look for the city. I’ll start writing some ideas down and doing some scribbles or storyboards of what I want the action to be after that.

From knowing what the shot needed from the characters and environments I started blocking out the shot in Maya with basic primitive shapes. Early on it’s more about thinking with larger strokes and saving all the tinier details for later once I have my camera and animation locked in.  My hero character was made with zbrush, maya, xgen, and substance painter. Other props were either done in maya and substance painter such as the skateboard and cars.

Once the assets were built and rigged I could move onto animation. I chose to use an idle animation as my base from my motion capture library as a starting point. From here I blocked out the skating animation again thinking of the key points from start, middle, and end. The goal of this is to figure out the timing of the shot. How far does she travel throughout world space? What is the focus of the shot? What is the mood of the shot, is she in danger, having fun, or causing trouble? Animation is all about creating a believable character through puppeted acting.

As I blocked the animation, I also had to decide which camera angle was best for the shot. Now if this was part of a larger sequence of shots there would have to be other decisions such as what was happening before and after the shot. It’s all about purpose as that will make it more authentic. Since this was a one off shot, I chose a quarter angle wide view from the street corner as that had the most dynamic angle for her skating. Thinking of the camera as a character I thought, how would it react to seeing her cruising down the street? Would it be locked off or would we follow her? For the final camera animation I decided to use a Virtual camera. I used an app called Wyliecam. It’s a great application that mimics real world camera moves as it uses ar technology that can be fed into Maya and allow for a more natural camera move.

Lighting and set dressing a shot

Once I had all of my character animation, cloth simulation, and camera cleanup done I exported the scene into Unreal to utilise the real time renderers features. For the set dressing I used quixel assets as they have a large library to choose from and are easily customisable. As this is an animated shot and not live action there’s more creative liberties to play with. The lighting can be pushed to more vibrant tones you couldn’t quite get from a physical shoot. Since the boundaries are limitless I like to set some rules. How does the environment influence the story? Is she living in a world that is clean or dirty? Does it feel safe or could a wall collapse? I chose to go for a balance of steady structured bricks but not with the best cleaning to help sell this is a lived in world. Golden hour creates such a beautiful mood, it also allows for long casted shadows that can break up the environment with more interesting shapes.

After putting the final touches in Unreal, I’ll render these out as an exr with aovs and bring them into fusion and after effects to do the final tweaking. Being able to adjust diffuse and specular allows you to really push the shot. The raw render will get you 90% there and the compositing work will be the last 10% to really sell it. Colour grading also comes into play, since I already did most of the work in the lighting stage in Unreal this is more of just adjusting the shadows and highlights and adding film grain to break up the cg elements more. I also will do my motion blur in post as it’s easier to adjust how much I want without having to worry about playback speeds or weird artifacting.

How to take it further

Now that the shot is done, you might wonder what else could possibly be done. Well audio is a big component of a shot. There can be sound design of a downtown busy street with traffic and trolleys in the background or it could be strong gusty winds in a quiet neighbourhood like an apocalyptic world. The music could be intense or it could be more uplifting and whimsical. Again it’s all about the story and plussing the decisions you made early on in the process.

Tristan Kilmer is a senior film industry artist who received a BFA degree from the California Institute of the Arts in Experimental Animation. His professional work includes being a Previsualization Artist at Digital Domain (for Star Trek: Picard and Freeguy), Animator at Halon (for Disintegration and Borderlands 3 cinematics), Key Layout Artist at MPC (for Detective Pikachu, Aquaman, Dumbo, The Predator, and many more), and as an Animation Director at One Roof Entertainment (for 2001: An Edm Odyssey). You can find more of his work on Vimeo and Artstation.