How Not To Finance Your Film | Raindance Film School

6 Myths Of Film Finance: How NOT To Finance Film

The world of film finance is filled with myths and misinformation. It is also filled with ruthless sharks and grifters. In my 30 years at Raindance I have seen just about every type of film finance that you shouldn’t ever use. Have a look (below) and see if you agree (or not).

Film festivals and film markets are not the only place where bad information lurks. The internet is rammed with pixel after pixel of just plain terrible advice. As Donald Trump would say: FAKE NEWS!

What is true is that real people with real money are out there willing to fund your film if you compose the correct strategy and approach them correctly.

Please don’t ever try one of these strategies:

I have friend after friend who will bump into a celebrity and get their verbal agreement to be in their film. Sometimes the verbal agreement is as subtle as a raised eyebrow. These misguided filmmaker then plan their entire film around this celebrity actors ‘agreement’.

When you add a name actor to your presentation without their knowledge or written permission, you are stuck with that actor. It works like this: Your investor will only fund if that specific actor has agreed. What happens next is you will spend weeks, months and even years trying to get the actor. In that case you will be known as a filmmaker waiting and waiting for a star to agree to be in your film, and not known as a filmmaker.

Would you hire an expert consultant without thoroughly checking them out in any other field? If you needed a builder, a brain surgeon or architect, wouldn’t you go to a trusted business or personal acquaintance and ask for their recommendation?

Not so, it seems in the film industry. It is filled with charlatans who prey on first time filmmakers with offers of easy access to fortune (and fame). I had two debut filmmakers tell me they pay $10,000 (in one case) and $5,000 to another who promised entry to the Raindance Film Festival.. Wow! Neither film was selected for our festival.

Numerous other filmmakers have contacted me about consultants who promised big bucks who who wanted an upfront fee. I have never known this to work.

People who fund businesses and films are really busy. The worst thing you can do is send reams and reams of pages to a potential investor. A good business plan should tell the story of your film. It should be short and sharp. Creating a good business plan is an art. Check out our Producers Foundation Certificate to learn how to create a package that increases the chances of successfully securing film finance.

New filmmakers often include box office figures in their business plan. This is misleading because the gross receipts do not account for theatrical and distributor deductions. If you investor is your great-aunt Emma, you might get away with it. But any investor with even the faintest inkling of how the income stream works will run a mile. 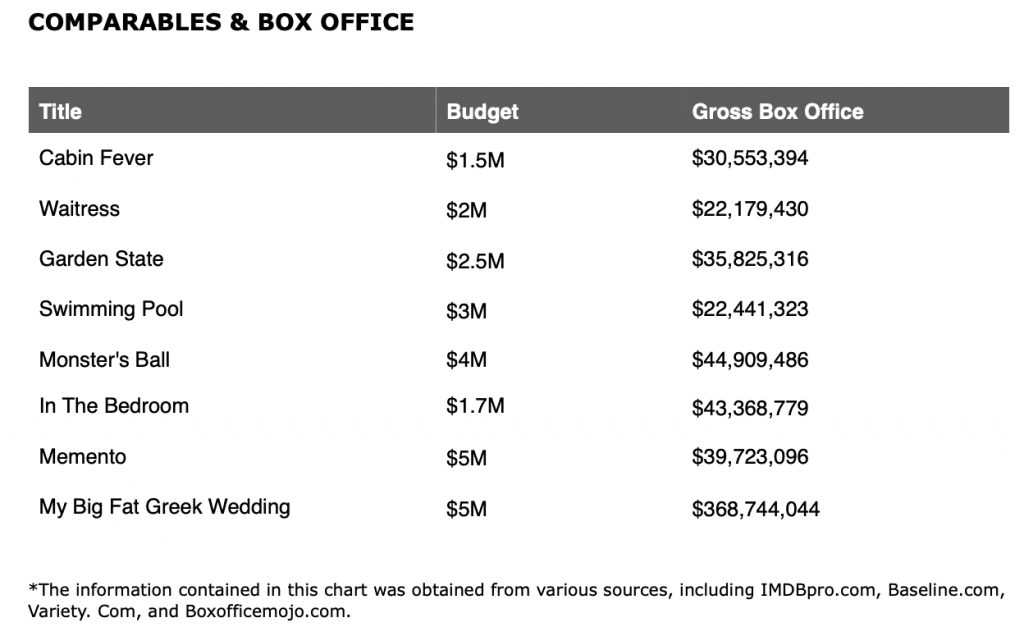 It is really tempting to offer an investor their money back plus money on top. This is a sure-fire way to create problems for you years after the film is finished.

For example: If you offer your investor a 110% return, and they only get 108% they will feel cheated.

And by the way: The business plan should always include a ‘wealth warning’. Include something along the lines of: Your investment in my film could fall as well as plummet.’ Make sure you get proper professional advice from your lawyer and accountant.

6. The Magic Bank of Film Finance

Over and over again I have heard this story:

A film producer tells me they have a bank that is going to finance their film. The only catch is you have to lodge 10-15% of the total budget of the film in a bank (typically a bank you have never herd of) and the rest of the money appears by magic 2-3 months later. Usually the so-called bank deal is arranged through an intermediary. No matter how glossy the paperwork, the end result is always the same. no money ever turns up. And you never get your deposit back.}

Bank finance is simple: You lodge collateral at the bank and they lend against your assets. No collateral. No loan. It’s that simple.

I’m not trying to pour cold water on your dream project. I’m just asking you to be realistic about your film finance goals.

If you want to know the sorts of questions film funders ask, look at the Raindance Raw Talent Self-Assessment Form

If you would like a course in preparing strategy for acquiring your film’s finance:

Ask how Raindance Film School can further your career